HALIFAX -- Long-term care facilities are seeing more cases of COVID-19 in Nova Scotia, and one facility has been hit particularly hard by the virus.

Northwood's Halifax facility has seen the largest number of cases. According to Northwood's website, a total of 38 residents and 21 staff members had tested positive for the virus as of Wednesday morning.

Northwood resident Bill Mont believes the situation is being mismanaged.

“I’m disappointed it got to this stage. It should have never gotten to this stage if it was handled properly,” said the 90-year-old Mont.

“I’m starting to get very upset to think that maybe my life is on the line and having gone through a lot -- I went through Depression, recession, war, the whole thing -- and I’m looking at this here. It’s not handled properly.”

Premier Stephen McNeil said Thursday that he’s concerned about the cluster of cases at Northwood and that health officials are working with the facility to try to curb the spread of the virus.

“It terrifies me, quite frankly, that it ends up in a long-term care facility, and we are taking this very seriously, and we'll do whatever we possibly can to protect the loved ones of those Nova Scotians and beyond who are feeling quite frightened,” said McNeil.

Chief Medical Officer of Health Dr. Robert Strang said Northwood is separating residents who have tested positive for the virus from other residents and has created a COVID-19 treatment unit. He said only three residents have become ill enough to be admitted to the unit.

Strang said many of the residents have had only mild symptoms while some have had no symptoms.

“Which is good news, that even in a population that's at increased risk for severe disease, what we're seeing by and large is a mild disease, but that doesn't mean we don't have to still apply all the necessary outbreak control precautions that we can,” he said.

Strang said, from now on, the province will include information about the number of cases at Nova Scotia long-term care facilities in its daily update about COVID-19.

Nova Scotia announced 30 new cases of COVID-19 on Thursday, bringing the total number of cases in the province to 579.

Forty-nine per cent of cases are female and 52 per cent are male.

The province says 176 people have recovered from the virus and their cases are considered resolved.

Twenty-seven of Nova Scotia’s 30 new cases were confirmed in the central zone. 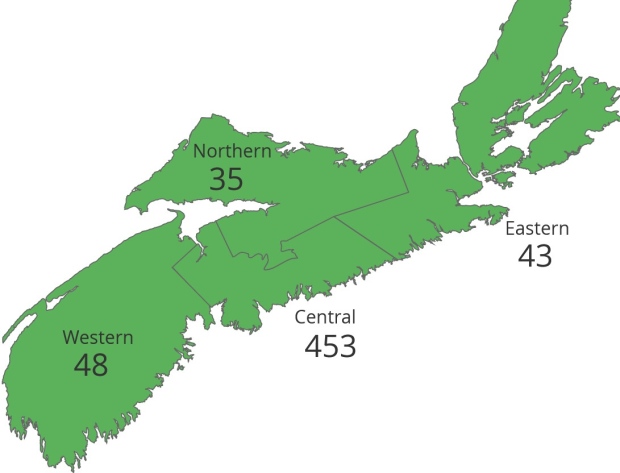 The self-isolation rule also applies to temporary foreign workers coming into the province to work in industries like agriculture.

“I want to reassure you that everyone coming into this province must follow public health protocols and self isolate and there are no exceptions, even for temporary foreign workers,” said McNeil.

McNeil said the province has worked with the agricultural sector to develop strict public health protocols for temporary foreign workers.

He said they will be assessed for signs of COVID-19 before boarding the plane and taken directly to their farm, or another location, where they will quarantine for 14 days and be monitored for symptoms.

“When the 14 days are up, they will go to work on our farms, as they have every spring for many years,” said the premier. “For many of these workers, they become part of our farming families. They play a very important role in the agricultural sector.”

'I have a second chance': Woman survives COVID-19 after two weeks on ventilator

'I don't want them in Ontario': Premier Ford fires back after Trump suggests loosening border

Does letting kids get COVID-19 help build immunity among the wider society?

Truth Tracker: There's no scientific proof that COVID-19 was made in a Chinese lab

'Stay sober': WHO's advice as Canadians drink their way through the pandemic