As COVID-19 cases climb in Nova Scotia, Strang says some numbers are reassuring

HALIFAX -- While the number of COVID-19 cases continues to climb in Nova Scotia, the province’s top doctor says he is reassured by some of the numbers he is seeing.

The province announced 32 new cases of the coronavirus on Wednesday, bringing the total number of confirmed cases in Nova Scotia to 549.

But Chief Medical Officer of Health Dr. Robert Strang said the fact that most people are testing negative and few people have been hospitalized are positive signs.

“It’s a good story, as far as I’m concerned,” said Strang during a news conference in Halifax Wednesday afternoon.

“We are testing lots of people; the vast majority of people are testing negative and we have the appropriate steps in place to deal with people who test positive.”

The QEII Health Sciences Centre's microbiology lab completed 885 tests on Tuesday and is operating around the clock.

Forty-nine per cent of cases are female and 52 per cent are male.

The province says 137 people have recovered from the virus and their cases are considered resolved.

Strang said most of the people in hospital have been there for “a length of time now” and there hasn’t been a significant increase in hospitalization numbers.

Strang said he’s not seeing significant impacts on the healthcare system at this time and he expects that most Nova Scotians will recover.

However, he warned that now is not the time to become complacent or relax the rules related to COVID-19.

When can we expect to see a peak in cases?

Strang said Nova Scotia will likely see a wave of COVID-19 cases towards the end of April or early May.

“That’s somewhat of a best guess,” he said. “We will see as time progresses, but that’s likely where we’re going to see it.”

He said, once Nova Scotia hits its peak, there won’t be a steep drop in cases, but rather a gradual decline.

As a result, he says it will likely be June until some of the measures and restrictions in place can be relaxed.

“Even when we do start to relax those measures, it’s not like we flip a switch,” said Strang. “We have to take them off carefully and gradually, monitoring the disease epidemiology as we do that and being prepared to course correct if necessary.”

Twenty-nine of Nova Scotia’s 32 new cases were confirmed in the central zone. 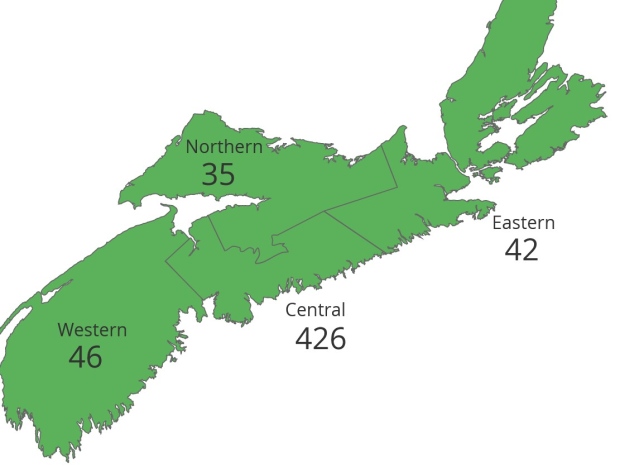 Strang clarified that it’s OK to break the rules related to physical distancing in order to help people with disabilities who need assistance.

“Many people who are blind or visually impaired may be independent, but there may be circumstances where they actually need help from somebody that may require somebody breaking that rule around social distancing,” said Strang.

“So I ask people to just be cognizant that if there is someone who is visually impaired who looks like they need help, please offer your help. Even if that does mean you have to break that social distancing, that’s OK in those circumstances.”

Grocery shopping during the pandemic

Strang said he is hearing safety concerns related to grocery shopping and he plans to discuss the issue with his colleagues across the country.

A number of grocery store employees have tested positive for COVID-19 in Nova Scotia, prompting the temporary closures of some stores as a precaution.

Strang noted that while some workers have tested positive, they may not have contracted the virus at the store.

He said many stores have taken measures to reduce the spread of the virus, such as limiting the number of people inside the store, reducing aisles to one-way lanes, and installing Plexiglass at the checkouts.

“There’s a role for the public here as well,” he said. “There are ways that we as a public can also work to make sure our grocery stores, which are essential for all of us, remain as safe as we can.”

Strang said that includes having one person from the household go to the store once a week, or shopping online, if possible.