HALIFAX -- Nova Scotia has reported another death related to COVID-19 and two new cases of the virus.

The province says the death involves a woman in her 80s who had underlying health conditions.

She died in the Nova Scotia Health Authority’s central zone, but she was not a resident of Northwood, or any other long-term care home.

Fifty-nine people have now died from COVID-19 in Nova Scotia. Fifty-two of those deaths have been at Halifax's Northwood long-term care home, which has seen the most significant outbreak in the province.

The province also reported two new cases of COVID-19 on Tuesday, which brings the total number of cases to 1,052.

“Both of these cases were known contacts of a previous case, so we know how they got exposed,” said Chief Medical Officer Dr. Robert Strang during a news conference in Halifax on Tuesday.

“There’s no indication that they were exposed in sort of general community exposure, which is good news.”

There was some confusion surrounding the number of new cases and total number of confirmed cases being reported by the province on Tuesday.

Strang addressed the discrepancy during Tuesday’s news conference, saying a positive case at Northwood was later found to be negative.

“The testing … done by the lab is very accurate but no test is perfect. That means there’s always a small chance for a test to have an inaccurate or an indeterminate result,” said Strang.

“In examination of one of our more recent cases, as we’re testing the residents and staff at Northwood, we did have a case that had been reported negative for a period of time, then had a positive test, then was followed up by a negative test. As we examined that closely with the lab, it was determined that this was a false positive test.”

Two more people have recovered from the virus, with a total of 976 people now recovered from COVID-19. This leaves 17 active cases in Nova Scotia, 15 of which are connected to Northwood.

Northwood currently has 11 residents and four staff members with active cases of COVID-19.

No other long-term care facilities have active cases of the virus at this time.

This leaves only two active cases outside of Northwood.

The province says one more person has been admitted to hospital. Seven people are now in hospital and three of those patients are in intensive care units.

CTV News has reached out to the province for clarity on hospitalizations and whether there are Northwood residents in hospital. The province has not yet responded to requests for that information.

The latest cases were confirmed in the central zone, which contains the Halifax Regional Municipality and has seen the most significant number of cases. 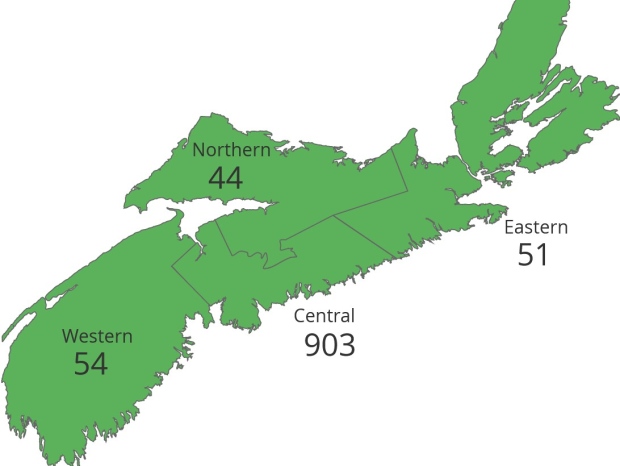