New warnings will soon appear near the popular Maces Bay Ledges on New Brunswick’s Bay of Fundy coast, where rescues are common for people trapped by rising tides. The latest incident happened this past weekend.

The Musquash Fire-Rescue Department came to the aid of three people, including a five-year-old, who suddenly found themselves surrounded by cold water in thick fog Sunday afternoon.

“That was the first rescue we attempted in recent memory in the fog, which made it quite a bit more challenging,” says Lt. Mike Delaney of Musquash Fire-Rescue.

The emergency response on Sunday included 15 firefighters and two boats out on the water. The three people were returned to shore with no injuries.

“We did purchase a boat specifically to deal with this,” says Chief Wayne Pollock, noting the department can count on making a few rescues like this every year.

Delaney says Sunday’s foggy rescue was largely successful due to the people having a cell phone with them, allowing the ability for them to call 911. Delaney says a 911 operator stayed on the line with the stranded group throughout the entire ordeal.

“We were able to talk to the 911 operator who was able to encourage them to shout, yell, whistle, things of that nature,” says Delaney.

ADDITIONAL WARNINGS ON THE WAY AFTER "MANY CLOSE CALLS"

Plans were already underway for additional warnings to be placed near the Maces Bay Ledges, prior to Sunday’s rescue.

“Fortunately, as of late, we’ve been lucky that we haven’t had a fatality here and we’re trying to prevent one,” says Pollock, who adds there’s been “many close calls.”

A sign will soon be posted near the area’s road entrance, advising people to take a phone with them before venturing out and head back to shore 90 minutes after low tide.

The sign will also include a QR code linking to the area’s daily tide table, along with a video showing the area’s unique hazard.

A blue civic address sign has already been placed at the entrance of 350 Maces Bay Road to help direct emergency crews to the area if necessary.

“The cell phone is critical, that could be the difference maker for sure,” says Pollock. “If you have a cell phone with you and realize that you’re in trouble, call 911 right away. I can’t stress that enough about the cell phone.” 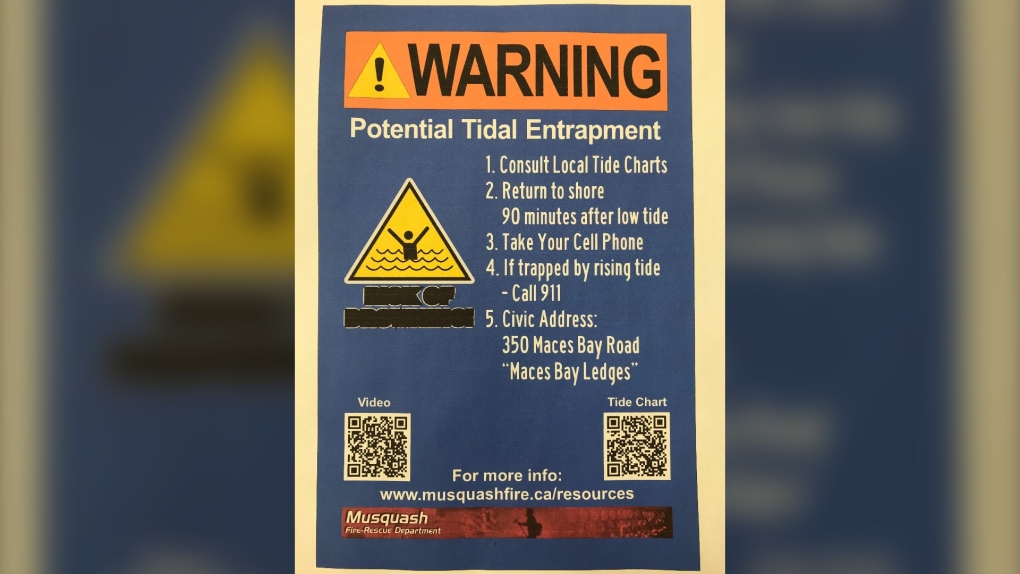 LEDGES CAN "BE DECEIVING"

The Maces Bay Ledges is popular with people harvesting clams, dulse, and winkles, but even locals may be unaware of the location’s distinct danger.

Delaney says the area can be “deceiving” at low tide because the topography may appear to be flat.

“Based on the differences of elevation in that area, when the tide does come back in, it almost floods rather than just give the appearance of rising waters,” he says. “So the area you just walked through now has a foot to two feet of water.”

And that water is very cold.

“The bay water is quite unforgiving,” says Delaney. “The temperature doesn’t warm up much compared to the winter. The longer you’re in the water, every minute that goes by, there’s less chance of us being able to get you. It’s also a lot harder to locate people who are in the water.”

A day after Russian President Vladimir Putin declared victory in seizing an eastern Ukraine province essential to his wartime aims, a city in the path of Moscow's offensive came under sustained bombardment, its mayor said Tuesday.

Saving for retirement is becoming out of reach for young Canadians

A new U.S. study shows that in high-trust neighbourhoods, those with a larger dog population had robbery rates that were almost two-thirds lower and murder rates that were cut in half.

Climate change protesters targeted a copy of Leonardo da Vinci's 'The Last Supper' at London's Royal Academy of Arts Tuesday, gluing themselves to the painting's frame and spray-painting 'No New Oil' next to it.