HALIFAX -- Nova Scotia has announced 27 new cases of COVID-19, bringing the total number of confirmed cases in the province to 900.

The province didn’t report any additional deaths on Monday. To date, there have been 24 deaths related to COVID-19 in Nova Scotia.

"We will get through this extraordinarily difficult time by pulling together and supporting each another," said Premier Stephen McNeil in a statement.

"Please continue to reach out to your loved ones, be there for those who are grieving or having a difficult time and know that we will come through this."

"Aggressive and accessible testing remains a critical part of Nova Scotia's fight against COVID-19. We need to identify and treat as many cases as we can," said Dr. Robert Strang, Nova Scotia's chief medical officer of health.

The province will not be holding a news conference on Monday.

As of Sunday, 10 long-term care homes in Nova Scotia had confirmed case of COVID-19, involving 198 residents and 95 staff members.

Most of those cases are at the Northwood facility in Halifax. Eighteen of the province’s 24 COVID-19 deaths have also been at Northwood.

Northwood reported one new case in a resident on Monday, bringing the total number of confirmed cases at the facility to 250. Of the 250 cases, 179 involve residents and 71 cases involve staff members.

“Please be assured that if your loved one tests positive for COVID-19 the family will be contacted by a member of our staff to discuss the test result and the care plan,” said Northwood in a statement on its website.

Twelve people are currently in hospital. Three patients are in intensive care units.

The province says 509 people have now recovered from the virus and their cases are considered resolved.

There are cases across the province, but most cases have been confirmed in the central zone, which contains the Halifax Regional Municipality.

More information is available in an online map, which breaks down the cases according to the Nova Scotia Health Authority’s four zones: 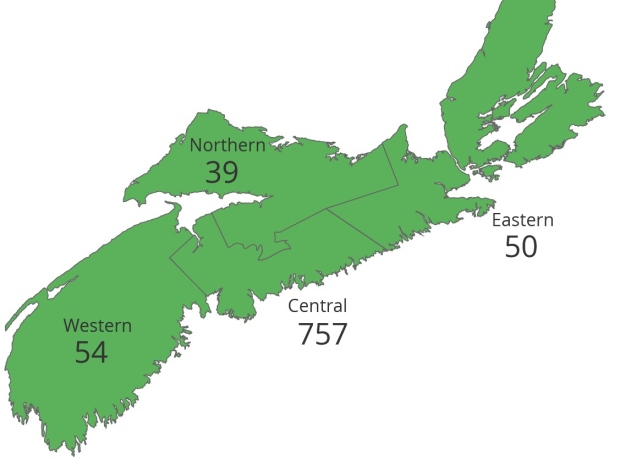 The provincial state of emergency, which was first declared on March 22, has been extended to May 3.

Waiting for life to return to pre-pandemic normal? 'It won't,' PM says

Ontario unveils steps to reopen. Here's what the 'new normal' will look like

Pediatricians warned about 'COVID toes' in children infected with COVID-19

Coronavirus could be tied to a rare but serious illness in children: U.K. doctors

'The situation is dire': Provinces scramble to provide respite for homeless amid COVID-19

Health Canada issues warning against use of hydroxychloroquine for COVID-19