HALIFAX -- Nova Scotia is reporting four more deaths related to COVID-19, bringing the total number of deaths in the province to 16.

Three of the deaths happened at Halifax’s Northwood long-term care home and the fourth occurred at Harbourstone Enhanced Care in Sydney, N.S.

The province has not released any additional details about the people who died.

"Our hearts ache for those who have lost a loved one to COVID-19. All Nova Scotians send their support and condolences to the families and friends of those who have passed," said Premier Stephen McNeil.

"The entire health-care system has rallied around Northwood and we continue to provide support and guidance to all long-term care homes to address this virus."

As of Wednesday, 10 licensed and unlicensed long-term care homes and seniors' facilities in Nova Scotia had cases of COVID-19, involving 158 residents and 79 staff.

Most of the cases are at Northwood, which was reporting 175 cases affecting 132 residents and 43 staff members on Wednesday.

A total of 11 residents have now died from COVID-19 at Northwood, which is the epicentre of the outbreak in Nova Scotia.

The province is also reporting 55 new cases of COVID-19, bringing the total number of confirmed cases to 827.

This is the biggest one-day spike in cases in Nova Scotia to date.

The provincial government says Nova Scotia has conducted more COVID-19 tests per capita than any other province.

Fifty-nine of the province’s cases are female and 41 per cent are male.

Ten people are currently in hospital. Four patients are in intensive care units.

The province says 358 people have now recovered and their cases are considered resolved.

There are cases across the province. More details are available in an online map, which breaks down the cases according to the Nova Scotia Health Authority’s four zones.

The vast majority of cases are confirmed in the central zone, which contains the Halifax Regional Municipality. 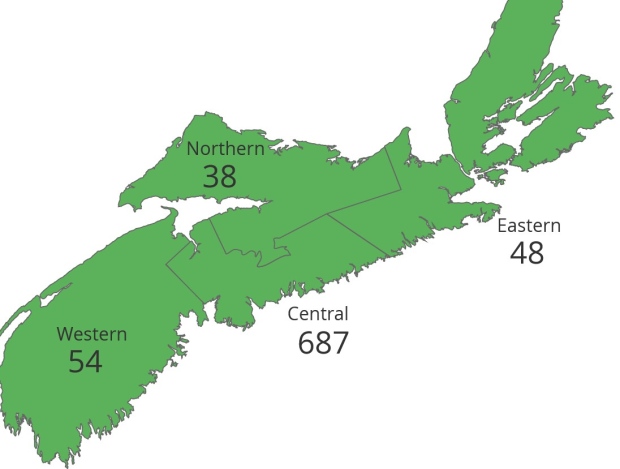 Most cases are connected to travel or a known case of COVID-19, but there is community spread, which is why travel has been removed as a requirement for testing.

Anyone with two or more of the following symptoms is asked to take an online questionnaire to determine if they need to call 811 for further assessment.

Anyone who has travelled outside Nova Scotia is also required to self-isolate for two weeks.

First phase of re-opening Sask. economy to begin on May 4

Trump approved of Georgia's plan to reopen before bashing it

Don't spend it all: CERB recipients will owe income tax on it next year