HALIFAX -- Nova Scotia is reporting two more deaths connected to COVID-19, bringing the total number of deaths in the province to 12.

There have now been a total of eight COVID-19 deaths at the facility.

"I extend my condolences to the families and loved ones of these individuals - you are in the thoughts of all Nova Scotians,” said Premier Stephen McNeil in a statement.

“My heart goes out to everyone at Northwood at this time and we are working very closely with our partners to continue to implement an emergency plan to help bring this virus under control at the facility.”

As of Tuesday, 10 licensed and unlicensed long-term care and seniors’ facilities in the province had confirmed cases of COVID-19, involving 148 residents and 65 staff members.

Most of the cases are at Northwood, which was reporting 112 cases among residents and 40 cases among staff members, on Tuesday.

Nova Scotia is also reporting 35 new cases of COVID-19, bringing the total number of confirmed cases in the province to 772.

Nova Scotia's confirmed cases range in age from under 10 to over 90.

Fifty-eight per cent of cases are female and 42 per cent are male.

The province says 330 people have now recovered from the virus and their cases are considered resolved.

McNeil also announced that the government will cover extra dispensing fees for pharmacare clients for refills on prescriptions during the pandemic.

On March 20, the Nova Scotia College of Pharmacists recommended that pharmacists dispense prescriptions every 30 days that would usually be filled for a longer period of time. This step was taken as a result of the COVID-19 pandemic to help protect the drug supply and is similar to measures in place in other parts of the country.

"We understand some people are feeling the financial strain of additional dispensing fees," said McNeil. "This will help people keep a little more money in their pockets, while protecting the drug supply to ensure Nova Scotians can get the medications they need."

The province will also waive the prescription co-pay for clients of the Income Assistance program and the Low Income Pharmacare for Children program.

There are cases across Nova Scotia, with the vast majority confirmed in the central zone, which contains the Halifax Regional Municipality.

More information is available in an online map, which breaks down cases according to the Nova Scotia Health Authority’s four zones. 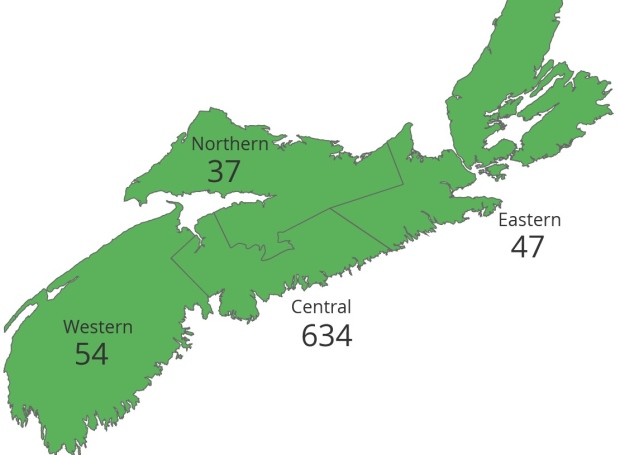 Most of the province’s 772 cases are connected to travel or a known case, but there is community spread. As a result, travel has been removed as a requirement for testing.

The list of symptoms for which the province is screening has also been expanded.

Anyone who has two or more of the following symptoms is asked to take an online questionnaire to determine if they should call 811 for further assessment:

Anyone who has travelled outside Nova Scotia is also required to self-isolate for 14 days.

PM Trudeau announces $9B in new COVID-19 funding for students

'I had to get through this': Winnipeg man out of ICU for COVID-19