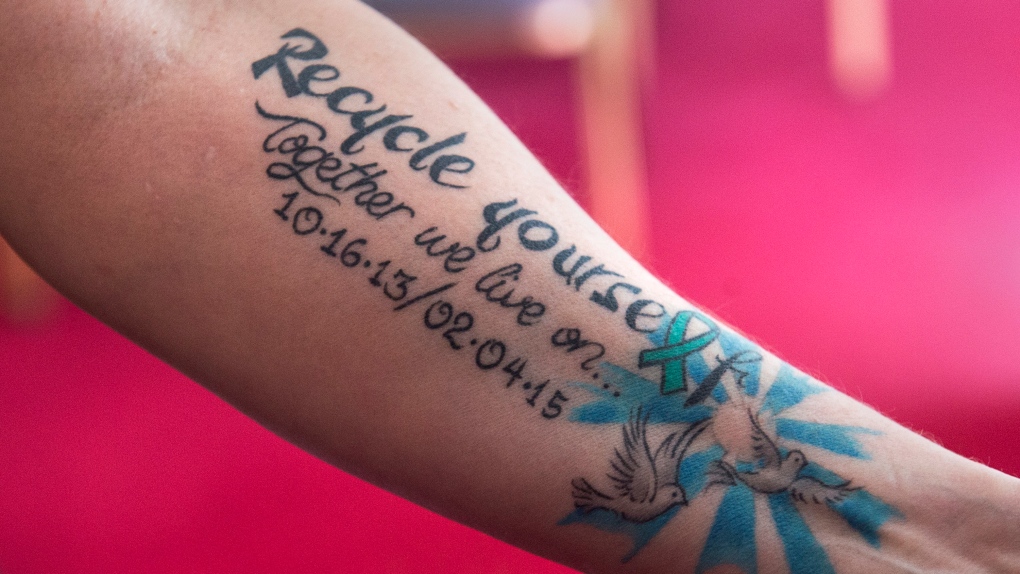 Cindy Ryan displays the tattoo that marks her two liver transplants as she attends a bill briefing at the legislature in Halifax on Tuesday, April 2, 2019. THE CANADIAN PRESS/Andrew Vaughan

HALIFAX -- Nova Scotia legislation that presumes consent for organ donations is poised to become law, with a key official saying the new system will address concerns raised by civil libertarians and others.

The Human Organ and Tissue Donation Act moved through the committee stage Tuesday and will soon go to final reading in the legislature, making Nova Scotia the first jurisdiction in North America to adopt presumed consent for donation.

Although some groups and individuals have raised concerns, no one came forward to challenge the bill at the committee stage.

Once passed, the legislation isn't expected to take effect for at least a year to allow time for planning, education and public awareness.

"Things around whether they (people) have a right to control their own body or whether particularly vulnerable populations like immigrants or groups like that would have their culture respected," said Beed. "Those are the kinds of things that we have heard about and we are going to respect that and build in ways to address those concerns."

In an interview Monday, Cara Zwibel of the Canadian Civil Liberties Association said she has read the bill and wonders how it would work in practice.

Zwibel said many people who are opposed to presumed consent object to having the state telling them what to do with their bodies, and more discussion is needed.

She said she was surprised to learn the bill, introduced last Tuesday, was already at the committee stage.

"It does seem like it's the kind of bill where you'd want to take some time and hear from stakeholders and in this case everyone is kind of a stakeholder," said Zwibel.

In fact, the committee held a hearing on Monday but deferred it for a day after no one showed up to testify. On Monday, only Beed and two other health officials appeared to speak.

Kerry Bowman, a bioethicist at the University of Toronto also said he was surprised at "how quiet" the overall reaction has been.

Bowman said he sees presumed consent as problematic for Canadian society, calling it "a very bad fit with cultural diversity." He said there are cultures with great concern about either the act of organ donation from a religious or cultural point of view, or from the diagnoses of brain death. which often leads to organ donation.

"If we have a single situation in which we are taking organs from a person that would never have agreed to that I think that's very problematic ethically," he said.

Bowman said the more acceptable middle ground would simply be to "get out there and provide more support and more information about organ donation."

Under the proposed act, all adults in Nova Scotia would be considered potential organ donors unless they opt out.

Families will continue to be consulted about their loved ones' wishes regarding organ or tissue donation under the legislation. As well, those under 19 and people without decision-making capacity would be exempt, and would only be considered as donors if a parent, guardian or alternate decision-maker opts them in.

Beed said steps will be put in place to ensure the opt-out provisions are clear.

Premier Stephen McNeil has said the goal is to ensure there are more potential organ donors in order to save lives.

Beed told the committee that within five years of the legislation's implementation he expects Nova Scotia would see a 30 per cent increase in organ donations.

What ultimately happens in Nova Scotia will be closely watched by other provinces.

Saskatchewan Health Minister Jim Reiter recently said his office has requested to speak with his counterpart in Nova Scotia.

Reiter said his province needs to take steps such as creating an organ donor registry and getting more doctors to encourage organ donation. He said while Saskatchewan hasn't ruled out an opt-out system, it believes there are potential legal issues.

Beed said there may be changes that will be eventually needed to Nova Scotia's law as science evolves, but he doesn't anticipate legal troubles.

"I don't anticipate a specific sort of civil liberties kind of challenge, I'd be surprised by that," he said.