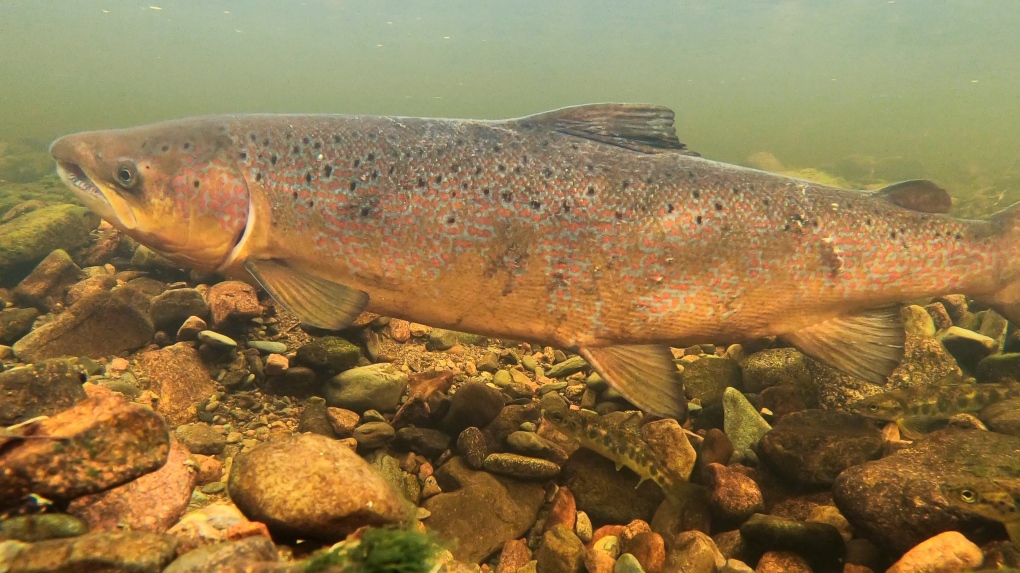 Atlantic Salmon Federation scientists estimate 103,900 large salmon returned to the 86 rivers studied in 2019, down from estimates of about 131,800 the year before. (THE CANADIAN PRESS/HO - ATLANTIC SALMON FEDERATION, Nick Hawkins & Tom Cheney)

HALIFAX -- A group advocating for the conservation of wild Atlantic salmon says the number of adult salmon returning to North America rivers fell to near historic lows last year.

The federation says there has been a "continuing a downward trend that threatens the sustainability of the species."

The vast majority of large salmon in North America return to three regions: Labrador, Quebec and the southern Gulf of St. Lawrence.

A large salmon is defined by the federation as adult Atlantic salmon that have spent two or more years at sea and have spawned at least twice.

Meanwhile, there were about 332,000 grilse -- adult salmon that have spent one winter at sea -- that returned to their native rivers, which is the eighth lowest level in the past five decades.

In recent decades, the harvest of salmon has been significantly reduced through a series of conservation measures, helping to stabilize some populations, but the species has recently been declining again.

Bill Taylor, the president of the federation, says the salmon are struggling to adapt to warming rivers and pressure from human development that continues to alter waterways and landscapes.

"It will take provincial and federal governments working side-by-side with First Nations organizations, watershed groups and non-governmental organizations on priority projects to make a change," he said.

Indigenous harvesters take 57 per cent of the allowed catch of the salmon, while recreational fisheries take 40 per cent, a local Labrador food fishery takes two per cent and residents of St-Pierre-Miquelon take one per cent.

These groups caught a total of 127 metric tonnes of the species last year.

"The combined effect is that fewer juvenile salmon parr are living to become smolt, and fewer smolt are making it successfully to their ocean feeding grounds," said Taylor.

The federation and its partners in Greenland and Iceland have agreed to reduce harvests at sea.

However, the group says much remains to be done in rivers in Canada and the United States.

The federation also says it's time for the federal Fisheries Department to follow up on its wild Atlantic salmon conservation policy and "to go further by supporting a new model for conservation that includes the provinces, Indigenous groups, and non-governmental organizations."

One of the recommendations that was to be completed in 2019 was to report on Canada's actions that "align with the North Atlantic Salmon Conservation Organization, or NASCO, goals to minimize the adverse impacts of aquaculture ... and transgenics on the wild stocks."

NASCO is an international organization established by convention in 1984 "to conserve, restore, enhance and rationally manage Atlantic salmon through international co-operation."

The federation said that after two rounds of review, the proposed plan by DFO, "still contains no actions on aquaculture that have been deemed acceptable by NASCO."

Federation spokesman Neville Crabbe said Canada committed at NASCO to eliminate the impacts of escapes and sea lice on wild salmon. "But they have done little to nothing, and this is now apparent to the international salmon conservation community," he said.

The federal Fisheries Department said it is working with partners on its 18-point plan for wild Atlantic salmon stocks.

"While some items have target completion dates, the work to protect and restore this iconic species is an ongoing and long-term endeavour," a spokesman said in an emailed statement.

It said a progress report is planned for later in 2020.

This report by The Canadian Press was first published June 25, 2020.