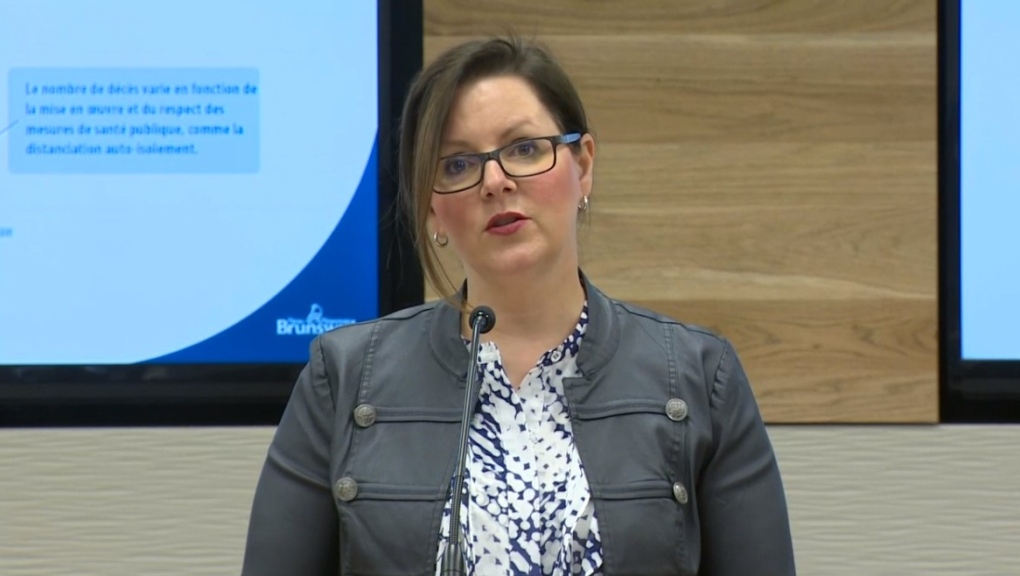 Dr. Jennifer Russell, New Brunswick's chief medical officer of health, provides an update on COVID-19 during a news conference in Fredericton on April 9, 2020.

HALIFAX -- One new case of the COVID-19 has been identified in New Brunswick, bringing the total number of cases in the province to 112.

In a news release Friday, the province said the new case is an individual in their 60s in the Saint John area.

Sixty people have recovered and their cases are being treated as resolved.

Ten people have been hospitalized and five have since been released.

Three of the five patients remaining in hospital are in an intensive care unit.

Of the 112 cases in the province, 63 are travel-related, 35 are close contacts of confirmed cases, six are the result of community transmission and eight remain under investigation.

In a news release issued Friday, N.B. chief medical officer of health Dr. Jennifer Russell warned residents to not let their guard down about spreading this virus over the long holiday weekend.

“It is difficult to not visit our parents, other family members and friends but it would be more difficult to see them become sick because of a decision that was made not to stay home,” said Russell. “Deciding to remain where you live does not mean you are not conveying your love for them. It is the opposite. It means you are conveying your love by protecting them.”

On Thursday, New Brunswick released projection models estimating that there could be between 550 and 1,750 deaths in the province during the course of the pandemic.

More detailing information about the modelling is available on the provincial government website.

Quebec schools, daycares could reopen before May 4: Legault

Lessons from Trappist monks in a time of quarantine

A Canadian doctor's plea as crisis worsens: 'We need the equipment now'

Father says Boris Johnson likely out of action for a while

'Salad with no dressing': Privileged Kuwaitis complain about five-star quarantine