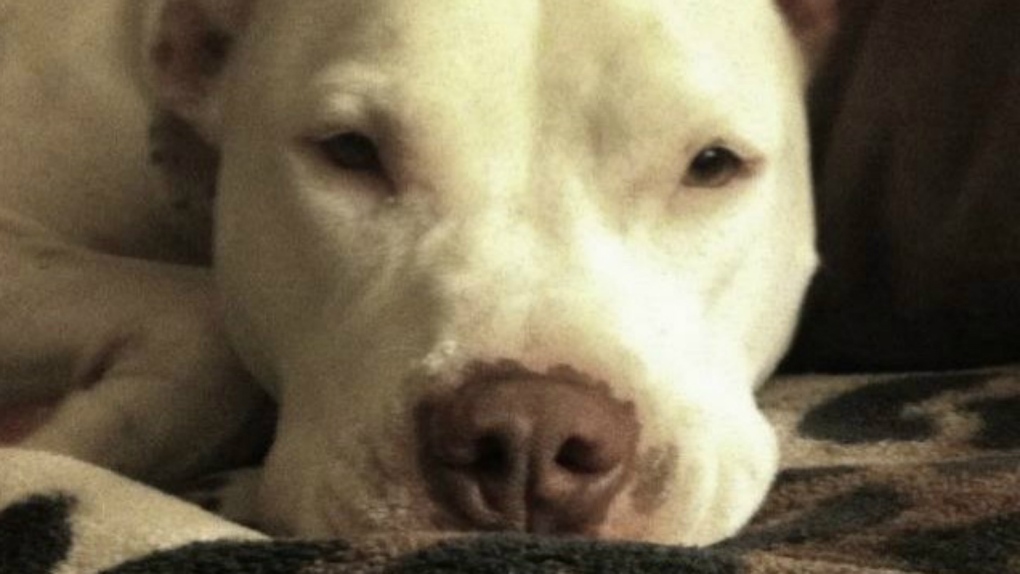 BRANDON, Man. -- Three weeks after fleeing the flames with her family in Fort McMurray, Lucy the pit bull is trying to get around a legal roadblock.

The white and brown pooch had been travelling this week in the back of a pickup truck as her owners headed east to stay with family in Prince Edward Island until they return to the fire-damaged city.

But they have stopped in Manitoba, because they can't drive through Ontario.

Ontario has a ban that prevents owning pit bulls, as well as bringing them into the province.

"I do understand their law but I don't understand how travelling through is an issue," says owner Tera Joseph.

"How do you get from one side of the country to the other without going through Ontario? You can't."

Joseph, her fiance Brad Garrett and three-year-old son, Coby, are waiting at a hotel in Brandon, west of Winnipeg, until they figure out how to get their beloved Lucy across Ontario.

The family can't go through the United States, says 27-year-old Joseph, because they don't have passports.

They wanted to get Lucy on a flight out of Winnipeg and have Joseph's mother pick up the dog in Charlottetown. But Winnipeg also has a pit bull ban and Joseph says she would need to apply to the city for a temporary permit to get Lucy to the airport.

She has looked into getting the dog on a flight out of Brandon, but most flights connect through Ontario or have overnight layovers elsewhere. And it would be too cruel to leave Lucy in her crate that long, Joseph says.

She adds that she would have flown Lucy out of Edmonton had she known before they left how much trouble their cross-country trek would be. But it wasn't until they were driving through Saskatchewan that Joseph found out Ontario's pit bull ban includes travel through the province.

The Ontario Attorney General's website details that a pit bull brought into the province can be seized and its owner subject to a fine and/or jail time. Exceptions are made for pit bulls participating in recognized dog shows and flyball tournaments. Flyball is a type of sport for dogs.

Ministry spokesman Brendan Crawley wouldn't say whether the province might grant exemptions for owners who are Fort McMurray evacuees.

"We are sorry to hear about the family's difficult situation as a result of the tragedy in Fort McMurray," Crawley said in an email.

While the province is responsible for the Dog Owners' Liability Act, which came into effect in 2005, Crawley says it's up to municipalities to enforce it.

Joseph called Ontario Provincial Police and some bylaw officials, she says, and they all advised her to keep Lucy out of Ontario.

Other dog owners on Facebook have pitched in with advice.

"I've heard a lot people who said, 'Just go for it. We made it through. We do it all the time with our pit bull.' But I've also heard the other end of it."

Joseph worries Lucy will be seized and possibly euthanized.

"With losing as much as we have already, I'm not willing to lose my dog as well," Joseph says.

A massive wildfire that spread into Fort McMurray on May 3 destroyed 2,400 buildings, and more than 80,000 residents remain under mandatory evacuation. Although a phased re-entry may begin June 1, the city still won't have full services and will be under a boil water advisory.

Joseph says her home is still standing, but three weeks of living in hotels has taken a toll and she wants to be back in P.E.I. with relatives.

She's just not going without her dog.

-- By Chris Purdy in Edmonton.