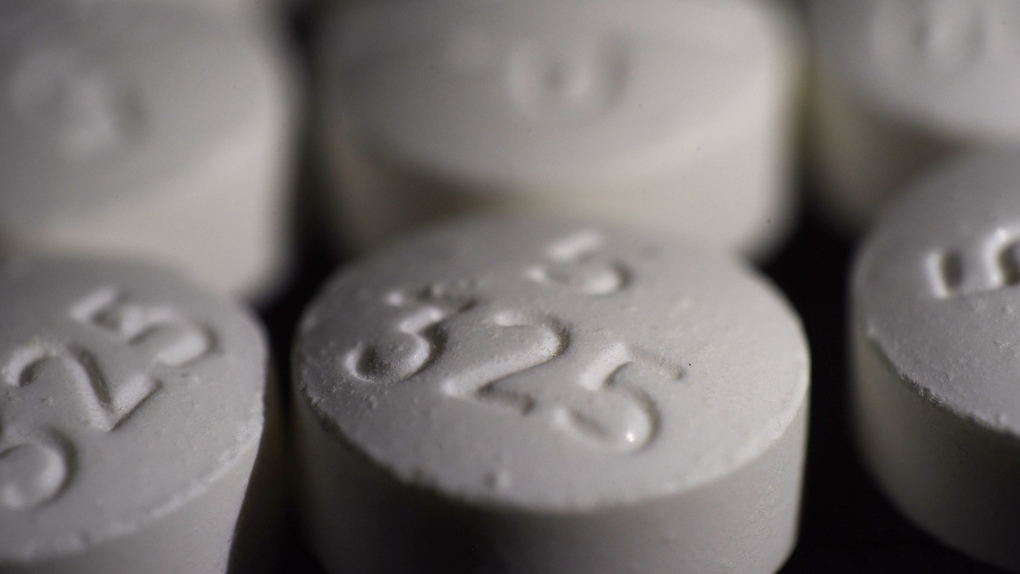 An arrangement of pills of the opioid oxycodone-acetaminophen in New York on Tuesday, Aug. 15, 2017. (AP Photo/Patrick Sison)

At least 241 people in New Brunswick have died from accidental opioid overdoses in the past 11 years and Health Minister Benoit Bourque says the number of related emergency room visits has increased up to 10 times over the past five years.

"We must continue our efforts to keep people from opioid abuse, and consider how best we can ensure that the pharmaceutical industry be held accountable for the health of New Brunswickers and the financial burden put on taxpayers for health-care costs," Bourque said in a statement Tuesday.

In the U.S., drugmakers are facing hundreds of lawsuits from governments claiming the companies played a role in sparking opioid addiction and an overdose crisis that killed 42,000 Americans in 2016.

At least 2,816 Canadians died from opioid-related causes in 2016, the New Brunswick government said.

In a statement, it said "there is some evidence that pharmaceutical companies and distributors may have engaged in some activities that led to the opioid crisis, including deceptive advertising and misrepresentations" about the drugs' addictiveness and effectiveness.

In June, Massachusetts sued the maker of prescription opioid painkiller OxyContin and its executives, accusing the company of spinning a "web of illegal deceit" to fuel the deadly drug abuse crisis while boosting profits.

Purdue Pharma is already defending lawsuits from several states and local governments, but Massachusetts was the first state to personally name the company's executives in a complaint, Attorney General Maura Healey said. It names 16 current and former executives and board members, including CEO Craig Landau and members of the Sackler family, which owns Purdue.

The lawsuit alleges Purdue deceived patients and doctors about the risks of opioids, pushed prescribers to keep patients on the drugs longer and aggressively targeted vulnerable populations, like the elderly and veterans.

"Their strategy was simple: The more drugs they sold, the more money they made, and the more people died," Healey said.

Purdue, based in Stamford, Connecticut, said it "vigorously" denies the allegations.

"We share the attorney general's concern about the opioid crisis," the company said in a statement. "We are disappointed, however, that in the midst of good faith negotiations with many states, the Commonwealth has decided to pursue a costly and protracted litigation process. We will continue to work collaboratively with the states toward bringing meaningful solutions," it said.

In March, a Saskatchewan judge recently rejected a $20-million national settlement against Purdue Pharma (Canada), saying it was inadequate.

British Columbia's Health Ministry has said the province has led efforts to recover tobacco-related health-care costs and is considering its options related to treatment of addiction.

"In light of the decision in Saskatchewan, the province is considering what options are available to recover its health-care costs from Purdue," the ministry said in an April statement.

In April, New Democratic Party MP Don Davies said the federal government should pursue compensation for the cost of treating addiction in a country that is the second-leading user of opioids, after the United States.

He said the health-care costs of addiction across the country amounted to about $1 billion between 2011 and 2016.

Health Canada said in April it has closely noted the outcome of U.S. proceedings against Purdue Pharma, where it has paid out $634 million in fines.

The department said action would be taken if it determines an advertisement poses a significant safety concern or contravenes its regulations or the Food and Drugs Act.

Purdue Pharma (Canada) said in a statement that it markets its products in accordance with Health Canada's regulations and the Food and Drugs Act.

"Canadians are facing a complex public health issue in which all stakeholders, including the pharmaceutical industry, have a role to play to provide practical and sustainable solutions," the statement said.

"Unfortunately, misuse and abuse and diversion of pain medications can lead to tragic consequences, including addiction, overdose and death."