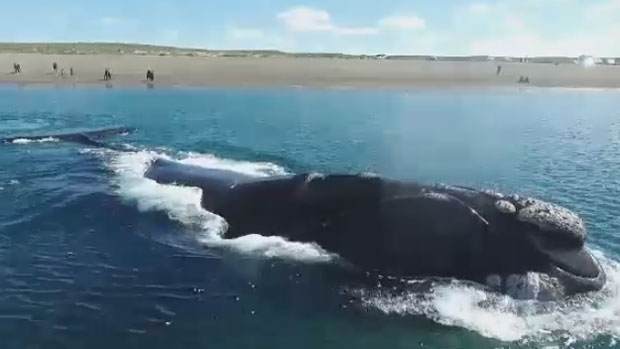 The North Atlantic right whale population is estimated to be at 420, with 15 dying since the spring of 2017.

They won't, however, include financial compensation for fishermen whose fisheries were closed.

"At the moment we are not talking about compensating with actual financial compensation the fishermen," LeBlanc said in a telephone interview.

New Brunswick Fisheries Minister Rick Doucet called Monday for measures to address lost revenue, and LeBlanc said that is "entirely consistent" with his department's approach to the developing situation in the Gulf of St. Lawrence.

LeBlanc said it includes looking at ways to help processing plant workers qualify for Employment Insurance, and a possible fall opening of the lobster fishery to make up for lost days.

Ottawa closed multiple fisheries this spring to prevent a repeat of last year's tragic summer. At least 18 right whales were found dead in 2017, including 12 in Canadian waters, likely due to rope entanglements and ship collisions.

The world population of right whales is down to about 450 animals.

LeBlanc said 53 right whales were spotted Tuesday in one Gulf zone that was closed in April. Another 70 sightings were confirmed in other areas last week by another airplane.

"There are dozens and dozens of right whales in the Gulf of St. Lawrence right now and I think that circumstance may last for a number of years, in which case we can't be in this position continually," LeBlanc said.

He said measures will have to be found to avoid the current circumstance, where lobster and other fisheries are reporting a 25 per cent reduction in landings in some areas.

He said the closures in adjacent waters affect about 100 lobster licence holders.

LeBlanc has rejected a call from two groups including the Maritime Fishermen's Union to exempt shallower waters up to 10 fathoms from the closures.

"The problem with that suggestion is that we have scientific studies ... that confirm in a number of cases that female whales and their calves go quite close to shore in water that shallow or shallower in pursuit of their food," LeBlanc said.

He said the critical question for the future is how best to introduce technology that will protect the whales and reduce potential fishing industry losses.

A pilot project is currently looking at two methods for ropeless crab traps -- one uses acoustics while the other uses an inflatable buoy.

"We think this offers a considerable opportunity to avoid year after year the situation we are in right now," LeBlanc said.