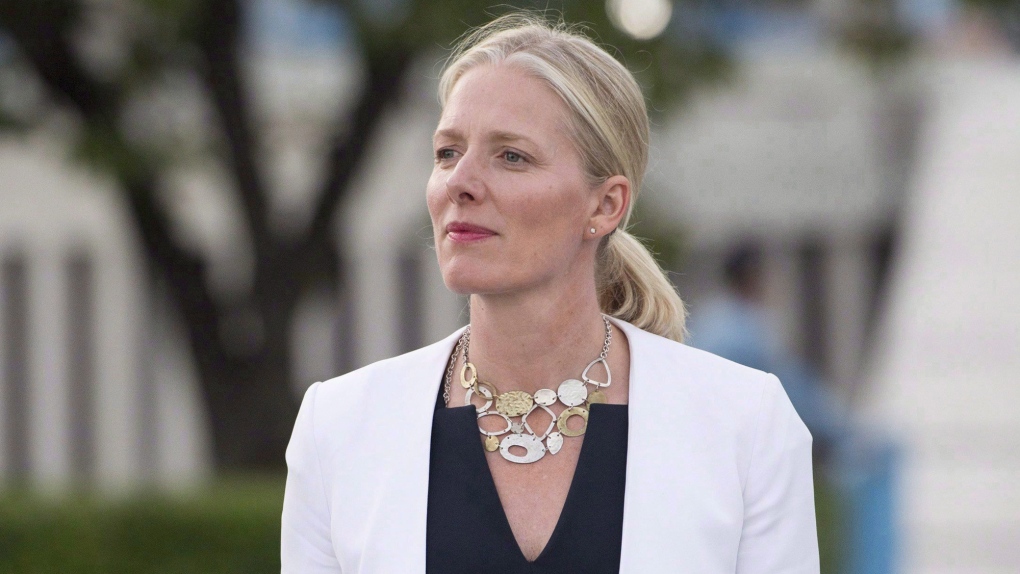 Minister of Environment and Climate Change Catherine McKenna makes her way to speak with media at the United Nations Headquarters in New York City, Wednesday September 20, 2017.(THE CANADIAN PRESS/Adrian Wyld)

HALIFAX -- Environment Minister Catherine McKenna launched a public consultation on plastic garbage Sunday as Ottawa tries to develop a national strategy to cut back on how much plastic Canadians use and toss away.

Prime Minister Justin Trudeau wants to get other G7 nations to sign a zero plastics waste charter at the G7 leaders meeting this June in Charlevoix, Que., but Canada doesn't yet have a handle on what it wants to do about the problem domestically.

Speaking from the seaside community of Eastern Passage, N.S., McKenna used Earth Day on Sunday to announce a public online consultation to help pinpoint ways for the country to eliminate plastic waste and reduce marine litter.

"We want to hear from Canadians about how we tackle pollution and waste," she said, flanked by Nova Scotia Environment Minister Iain Rankin and Nova Scotian MPs Darrell Samson and Andy Fillmore.

"It's not just cleaning up after the fact: it's actually being thoughtful about how we reduce, how we recycle, how we compost."

The announcement was made shortly before dozens of volunteers flocked to McNabs Island in the Halifax Harbour and McCormacks Beach in Eastern Passage to pick up litter as part of an Earth Day shoreline cleanup event.

According to the federal government, more than 150 million tonnes of plastic waste is clogging the oceans worldwide. It's estimated that plastic could outweigh fish by 2050.

Greenpeace Canada also used Earth Day Sunday to kick off a national campaign with a tool kit to help Canadians find ways to reduce their reliance on single-use plastics. The organization says Canadians generate about 3.25 million tonnes of plastic garbage each year, which they say could fill 140,000 garbage trucks. The campaign includes encouraging people to take their complaints about plastic-covered produce and overly wrapped food products to the manager at their local grocery store, write letters to the editor and lobby local politicians to enact anti-plastics policies.

Trudeau caught some heat from Greenpeace last week when he wouldn't agree to a ban on plastic drinking straws, something British Prime Minister Theresa May is enacting in the United Kingdom. The U.K. already saw a drastic drop in the use of plastic grocery bags when it started charging people for them in October 2015.

Many other countries, including Taiwan, Kenya, Rwanda, Italy and France, have enacted bans or limits on plastic grocery bags and straws. Even Queen Elizabeth is on board, banning single-use plastics entirely from royal residences and cafes.

McKenna, however, told The Canadian Press Sunday that Canada is a federation, and has to work with provinces and municipalities, where the jurisdiction for most garbage-related matters lies.

"It's a very complex issue, and it's not just about plastic straws," McKenna said.

Monique Breau showed up at McCormacks Beach Sunday morning with her 5-year-old son Jonas to help clean up litter.

She said it's never too early to teach children about the importance of protecting the environment.

Jonas, who was armed with a trash grabber nearly as tall as he was, seemed to have a good idea about how recycling works.

"We throw it in the plastic bin and we make it (into) new stuff," he said.

The event was organized by the Nova Scotia-based non-profit Ecology Action Centre, in partnership with Friends of McNabs Island, Oceans North, and Ocean Conservancy.

Heather Grant, the centre's marine communications coordinator, said the event presented an opportunity for Nova Scotians to learn what they can do better to protect the environment.

"As a coastal province, Nova Scotia obviously has a huge stake in the health of the marine environment," said Grant. "So having people come to clean up the beaches is a great way to get local people engaged and invested in the health of the oceans that the province depends on."

Louie Porta, vice-president of operations and projects for Oceans North, said garbage in the ocean can work its way up the food chain as bigger marine animals eat smaller ones that may have eaten plastic.

It can also contaminate the water and create health risks for people.

- with files from Mia Rabson in Ottawa.