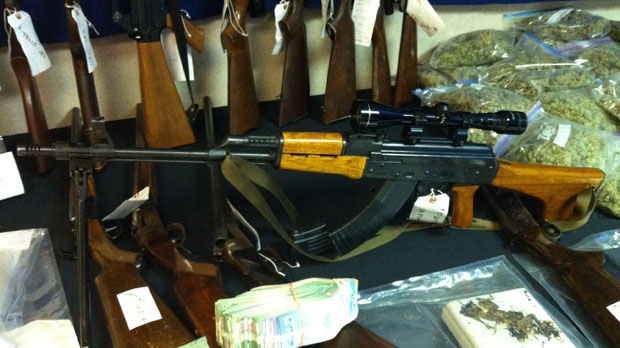 Police seized a quantity of drugs, weapons, vehicles and roughly $55,000 in cash after conducting a number of residential and vehicle searches in Cheticamp, Inverness, St. George, Southside Boularderie, Heatherton and Aspen.

Nova Scotia RCMP have made 24 arrests and laid over 130 charges following a 13-month drug investigation across Cape Breton and Antigonish County.

“Reducing crime is one of our provincial policing priorities and whenever we can disrupt harmful drug trafficking and drug abuse we are having a direct impact on spinoff criminal activity that is occurring in our communities,” says Supt. Darrell Beaton, the RCMP’s district policing officer for Northeast Nova Scotia.

Police seized a quantity of drugs, weapons, vehicles and roughly $55,000 in cash after conducting a number of residential and vehicle searches in Cheticamp, Inverness, St. George, Southside Boularderie, Heatherton and Aspen.

"Many of the rural communities where these arrests occurred would be the last place most of you would think we would find those engaged in drug trafficking," says Beaton. "Unfortunately, as police we know the drug culture has no boundaries."

The vehicles seized are considered proceeds of crime. They will be sold by the Crown, while the drugs and weapons will eventually be destroyed.

Insp. John Ryan says the charges and seizures indicate a clear link between the drug trade and violent crime.

“These individuals were beyond your street-level drug dealers, they were part of criminal groups that trafficked large quantities of drugs in and out of our community,” says Ryan, a federal support officer with the RCMP.

“They had access to guns, bulletproof vests, drugs and cash and they used whatever means necessary to get their job done.”

The 24 people accused in the case are facing over 130 charges which include: trafficking in cocaine, marijuana, hashish, magic mushrooms and ecstasy, as well as possession of prohibited weapons, resisting arrest and conspiracy to commit assault causing bodily harm, among several other charges.

Police say some of the accused have already appeared in court to answer to the charges. The rest will appear in court at a later date