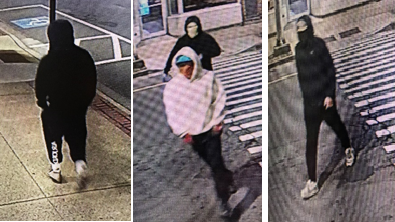 RCMP in Nova Scotia have released surveillance photos of three suspects who allegedly broke into three businesses in the Annapolis Valley region earlier this month.

Kings District RCMP says between 2:15 a.m. and 5:30 a.m. on Sept. 14, three businesses were broken into by the same three suspects.

The businesses were located on Commercial Street in New Minas, Main Street in Wolfville and Highway 1 in Grand Pre.

According to police, entry was gained into each of the businesses by breaking the front window. Lottery tickets, cigarettes and fireworks were stolen during the break-ins.

Police have released surveillance photos of the suspects and ask anyone with information to contact Kings District RCMP or Crime Stoppers.