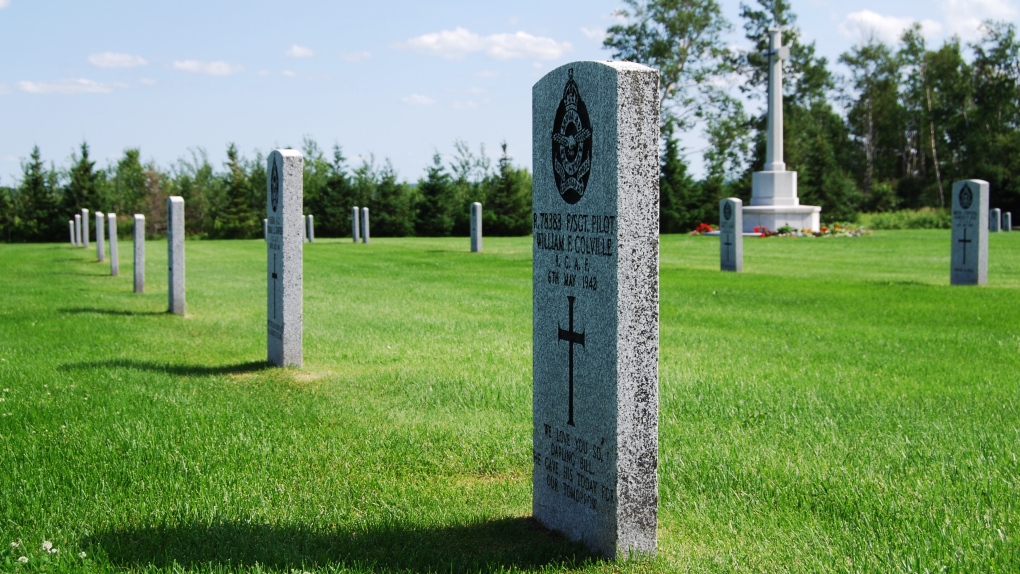 The Commonwealth War Graves Commission Cemetery is seen in this undated handout photo in Gander, N.L. (THE CANADIAN PRESS/HO,Town of Gander)

ST. JOHN'S, N.L. -- A stretch of the Trans-Canada Highway just east of Gander, N.L., passes two sites that speak to the town's outsized role in the history of war, peacekeeping and their accompanying tragedies.

The Silent Witness memorial marks the spot where 248 U.S. troops and eight crew members were killed in the Arrow Air crash of Dec. 12, 1985 -- the deadliest crash on Canadian soil -- as they headed home to Fort Campbell, Ky., from a peacekeeping mission in the Sinai Peninsula.

Just down the road, the Commonwealth War Graves Commission Cemetery holds the graves of 100 airmen from Canada, Britain and Australia who died during the Second World War, when Gander was a prominent staging ground for aircraft travelling between North America and Great Britain. Most of the dead were killed in aircraft that crashed in the area during the war.

Families of the fallen have made the pilgrimage to Gander over the years, and a ceremony on Remembrance Day will acknowledge those lost lives and others by renaming the two-kilometre section of road "Remembrance Way."

"Along this very short stretch of highway are two very prominent reminders of the sacrifices made by servicepeople around the world," Gander Mayor Percy Farwell said in an interview.

"With the signage, it's a reminder every day of that sacrifice."

The ceremony at the North Atlantic Aviation Museum next Monday will follow the town's Remembrance Day ceremony that morning. Two new signs bearing the name Remembrance Way, one facing east and one facing west, are now posted about two kilometres apart.

The signs are adorned with a poppy symbol and the eagle logo of the 101st Airborne Division, known as the Screaming Eagles, for members of that division who died in the 1985 crash.

The Town of Gander proposed the renaming, which was then approved by the provincial Department of Transportation and Works. But the idea originated with Robert Smith, a retired military police officer who was stationed at the base in Gander when Arrow Air Flight 1285 went down.

Smith, who held the rank of sergeant when he retired, said the high death toll from the crash stuck with him and other first responders in the years that followed. An inconclusive official report cited ice on the wings or an onboard explosion as possible causes of the tragedy.

"That's sort of the thought that keeps going around in your head: 'If we could have just saved one person,"' Smith said from his home in Mississauga, Ont. "For everyone to be deceased when you get there, that's a pretty big mountain to get over."

For Smith, talking with families of the dead and with other first responders has been key to his healing.

After a 2017 memorial ceremony in Gander for the Arrow Air crash, Smith spoke with Farwell, the mayor, about renaming the portion of highway for the 101st Airborne Division. That concept was broadened to include the nearby Commonwealth grave site.

Smith will touch down in Newfoundland this Sunday ahead of the event, and he said he has heard from some families of American soldiers and from fellow first responders who also plan to be in Gander for the ceremony.

"I think that would be another positive opportunity for the first responders who have never met any of the families of the fallen from this crash, to get together, discuss, have a hug or two," Smith said. "This is all positive stuff as far as this renaming ceremony goes."

He said such opportunities help the mental health of people who can't forget the human cost of global conflict and peacekeeping.

"Just talking to the other first responders and families of the fallen ... if I can use the term medicine, that's pretty good medicine right there," he said.