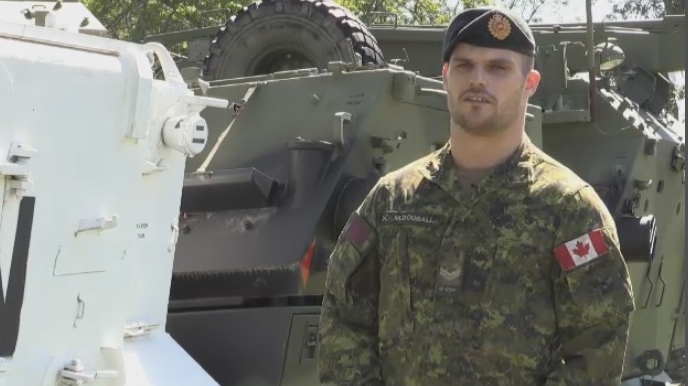 A New Brunswick man is on the road to recovery after hitting a snag on his 500-kilometre challenge.

OROMOCTO, N.B. -- A New Brunswick man is on the road to recovery after hitting a snag on his 500-kilometre challenge.

While on track to raise money for 'Wounded Warriors' Cpl. Marc McDougall ended up with an injury himself.

"In total 150 kilometers, I started out in Cape Tormentine and did 70 km the first day, and it was rough but that was what I was expecting, no foot pain there," McDougall said.

An important message, listening to what his body told him.

"My body mechanics, I was overcompensating a lot, turning my foot in so I knew from my history working out and just physical fitness that I knew overcompensating one way would harm another spot," he said.

But it hasn't stopped McDougall from giving up on his goal.

Wounded Warriors is close to his heart, not only as a military member.

"My wife is a paramedic, my brother-in-law is RCMP, and also other family members, and a lot of friends that I've seen over the years deal with mental health wounds. It's really important to me to do what I can to help that cause,” McDougall said.

McDougall was forced to park his run, for now, but already has a plan in place to rack up those last 370 km when he's healed.

He wants to finish the mission for the organization, and the challenge for himself.

"I've had a couple of x-rays recently, right now the timeline is about four weeks with my boot on and recovery time, and then just a week of light running just to get the movement back under my feet again before I can really take on the challenge. But the goal is now to use the weekends," he said.

He's currently raised more than $7,000 towards his goal.

"It's a really big thing to help out, so I put just $10,000 as a pretty lofty goal, but the response and the support has been overwhelming and an incredible success and I'm really excited to hopefully get to that $10,000, and even above that if that's possible."

Keep an eye out on the New Brunswick highways for him as he completes his goal on weekends this fall.