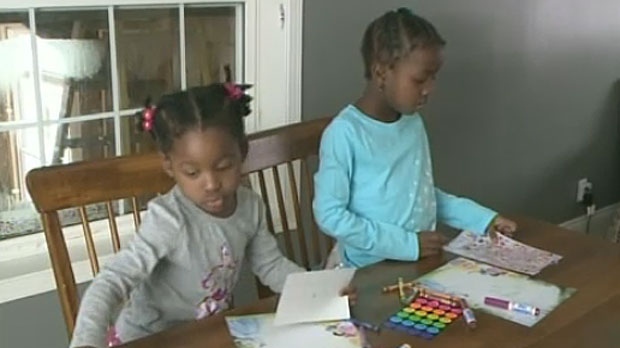 Sisters Julie and Avery Gray were living in an orphanage when the earthquake struck Jan. 12, 2010, killing 200,000 people

Saturday marks the third anniversary of the earthquake that devastated Haiti and the anniversary will be especially poignant in one New Brunswick community.

Her parents, Tim and Michelle Gray, had already begun the adoption process for Julie and her sister Avery.

Michelle Gray says the quake jolted her, but only for a moment.

“I remember sitting, I think I was in the chair, and Tim was over here on the couch, and I just said ‘they’re OK, they’re OK.’ I don’t know why I knew. I just felt a peace about it.”

Within a week, the Northampton couple was in Florida to pick up their two little girls.

With Haiti still reeling from the disaster, and the world rushing to respond, the Grays were doing what they could.

“It’s important to look after the orphans, right, and these are two perfect examples and they’re our kids,” says Tim Gray. “Whether you adopt kids or you have kids biologically, it’s the same thing.”

As the Grays rejoiced over bringing their daughters home, tens of thousands of families grieved, including one family who lived just minutes away from the Grays.

RCMP Sgt. Mark Gallagher was among those who died in Haiti and a group in Woodstock has established a number of charitable efforts, including one in Gallagher’s name.

They plan to honour him Saturday.

“I’ll be asking people to remember the children because, ultimately, it’s about the children,” says charitable organizer Richard Blaquiere. “But also to remember Mark for the work that he started and because of him, unfortunately because he passed away, we’re going to try to keep his name alive for a long, long time.”

The Grays will remember too, but only briefly.

“For us, it’s Gotcha Day. That’s what most adoptive parents celebrate, is Happy Gotcha Day, so we’ll have a little celebration next Friday,” says Michelle Gray. “But we definitely will take time to remember on Saturday.”

While they remember, they say they will also continue to hope for Haiti and its continued recovery.