Small N.S. community gets creative getting to work after bridge collapses 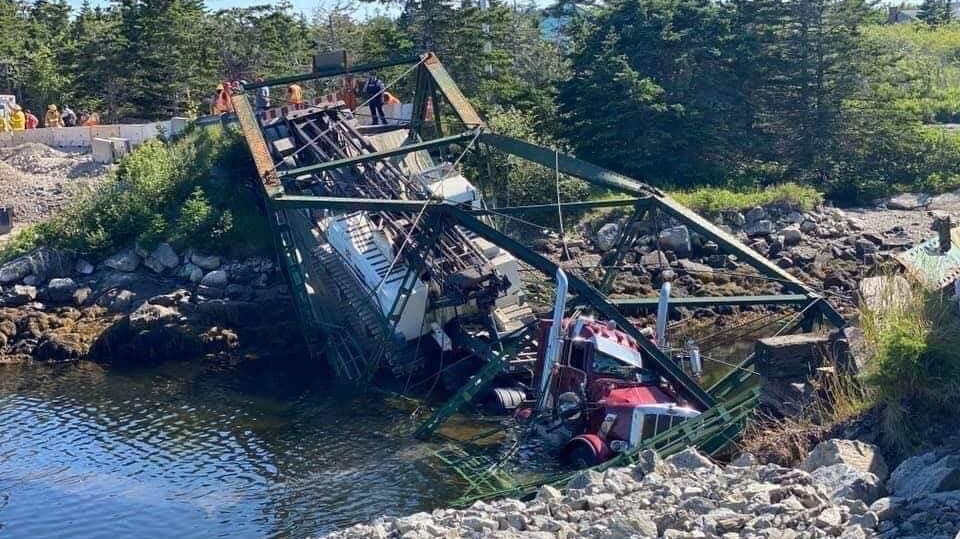 One worker was taken to hospital for observation after Tittle Bridge near Canso, N.S., collapsed while a contractor's truck was driving across it during construction work. (COURTESY BOB ROBERTS)

CANSO, N.S. -- It was a scene that stunned an entire community and the many who saw the video online of a Guysborough County bridge collapsing on Tuesday.

"Nobody got hurt, but she went down like a ton of bricks," said area councillor Fin Armsworthy.

On Wednesday, tangled rubble is all that's left of the Tittle Bridge, a link between the community of Canso and Durrell's Island, where more than two dozen permanent residents live on the other side.

"I was shocked when I first heard about it collapsing," said Durrell's Island resident Pat Rhynold, who had to get creative to get to work Wednesday in Canso.

"They say when you get older, you go back to your childhood, and that's kind of what I'm doing, because when I first went to work at 16, I rowed across and went to work at the fish plant," Rhynold said.  "And so, here I am at 64, not rowing across, my husband's taking me with a motorboat."

Nova Scotia's Department of Transportation and Infrastructure Renewal says the bridge collapsed when contractors were moving equipment on the site by truck.

One worker was taken to hospital for observation.

They say the bridge was scheduled to be replaced this summer.

The local fire department is helping residents for now, but the area's councillor is hoping a temporary fix will be ready soon.

The cause of the collapse is being investigated and the Department of Labour and Advanced Education has been notified.

For now, people who live on the island will shuttle back and forth on boats, and those who know the area say they’re glad this didn’t happen at high tide, or someone could have been more seriously hurt.

"This is a small community, and you know people who are involved with the project," Rhynold said. "And then, after that set in, it was just disbelief, I guess, that this had happened."