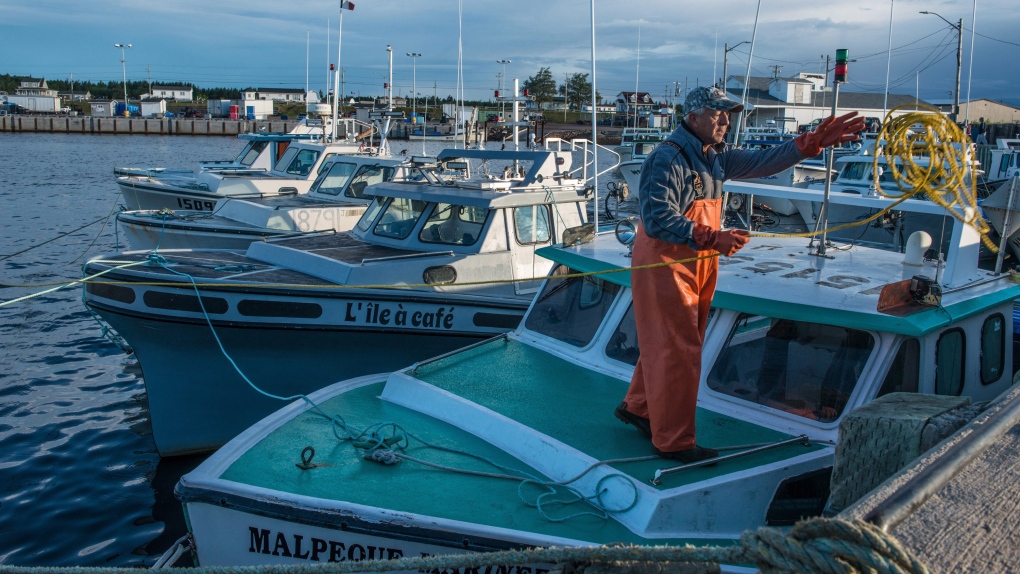 Boat helper Paul Emile Robichaud ties up his brother's boat as lobster fishers in the area chose to not go out today in protest of the current lobster prices on the market, in Pointe-Sapin, N.B., on Thursday, Aug. 17, 2017. Some lobster fishermen in eastern New Brunswick have tied up their boats in a protest over the prices they're getting for lobster. Fishermen in ports such as Pointe Sapin and Richibucto remained at the docks Thursday, saying landings are down and prices are low. (THE CANADIAN PRESS/Diane Doiron)

SHEDIAC, N.B. -- Some lobster fishermen in eastern New Brunswick tied up their boats and remained onshore Thursday in a protest over the prices they're getting for lobster.

Fishermen in ports such as Pointe-Sapin and Richibucto remained at the docks, saying landings are down and prices are low.

Richard said fishermen aren't getting any answers from the processors and buyers about the price drop.

"The fishermen are frustrated because they don't know exactly where to get that information," he said.

But Jerry Amirault, president of the Lobster Producers Association of New Brunswick and Nova Scotia, said producers are paying what the market can bear.

"At this time the markets are fragile, and we are working with the MFU and the fishermen," he said.

Amirault said the change in the value of the Canadian dollar has had an impact on exports.

Since late July the value of the U.S. dollar has gone from $1.35 Canadian to $1.25 Canadian, the equivalent of a 7 per cent drop for Canadian exporters selling in U.S. dollars.

The provincial Department of Fisheries issued a statement, saying it is working with the fishermen and the processors.

"The price of lobster is determined by market conditions. There are many components of pricing within the marketplace. They include ... availability of supply, fluctuation in market demand and fluctuation in exchange rates," the statement reads.

In 2016, the value of New Brunswick's exports of seafood increased by $157 million to $1.6 billion compared to the year before.

It's not the first time fishermen have protested over lobster prices.

In 2013, fishermen in New Brunswick, P.E.I. and Nova Scotia stayed at the docks in a protest over prices. At the time, prices had dipped to about $2.75 per pound for canners and $3.25 per pound for market lobsters.

Richard said not all the current lobster fishermen are protesting the prices. He said some of the boats didn't go out Thursday because of high winds.

The fall season, for the zone covering much of the Northumberland Strait, opened Aug. 8 and runs until Oct. 9.