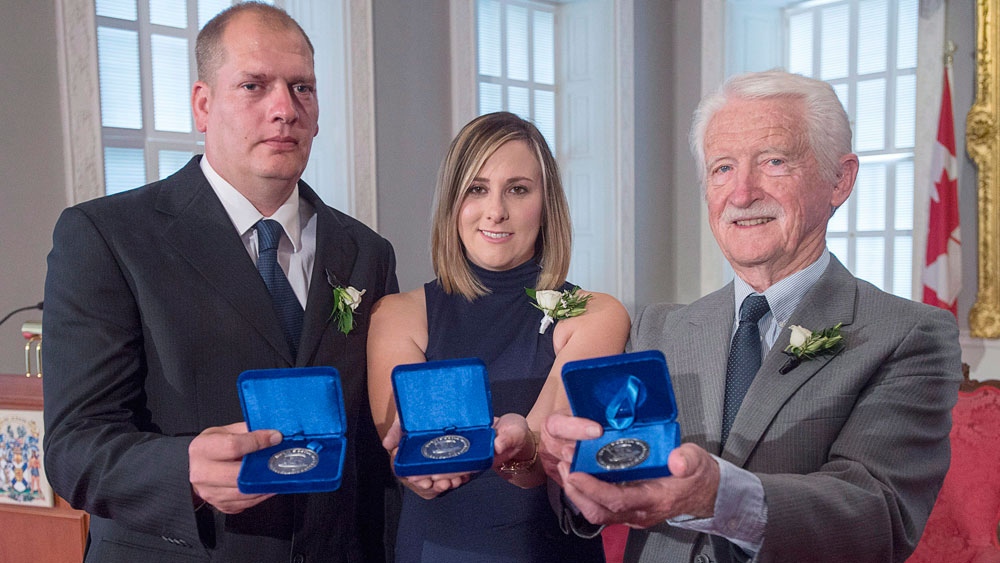 HALIFAX -- Three Nova Scotians were presented with provincial medals of bravery Wednesday, each of their stories described by the premier as a testament to selflessness, courage and sacrifice. During a ceremony at the legislature, Premier Stephen McNeil said they represented "the very best of what it means to be human."

Here are their stories:

Kendra Baldwin vividly recalls the cries for help from a group of children at the beach suddenly caught in a riptide off the west coast of Cape Breton.

"I turned around and said, 'I think they need help,' and my sister was in the water before I could turn around," Baldwin said in an interview Wednesday after her sister, Anne Michelle Curtis, was posthumously awarded Nova Scotia's Medal of Bravery.

Curtis, 45, swam into the dangerous current, rescued her nine-year-old son Harrison and another child, then swam another 60 metres to save a struggling 14-year-old boy on Aug. 2, 2015.

"He was the farther out," Baldwin said after the ceremony at the provincial legislature. "He didn't have any flotation device ... It was kind of chaotic that day because there were so many people in the water and riptide came up so fast."

Baldwin, who was also in the water helping children to shore, said she noticed there was something wrong with her sister, who had long been a strong swimmer.

"I swam over to her and I said, 'We can do this.' But as we got closer to shore, she collapsed."

On Wednesday, Baldwin recalled how her sister -- a palliative care nurse -- defined her life through helping others.

"She gave of herself everyday in her career," she said. "She was very selfless. That's how she lived her life. She always thought of other people first ... And that's why there was no hesitation for her that day."

Baldwin recalled how her sister loved swimming and being around other people when the two were growing up in New Waterford, N.S. Curtis coached soccer teams and took professional development courses to ensure she was offering her patients the best care, Baldwin said.

Baldwin said Wednesday's ceremony was bittersweet for her family.

"I think she would be very honoured to receive the award," Baldwin said, sobbing between breaths. "But for us it's hard because ... she's not here. And we miss her."

Premier Stephen McNeil was overcome with emotion when he spoke of Curtis's act of courage.

"We are, as a province, grateful to honour and recognize her selfless giving. She gave the ultimate, which was her own life, to ensure that three young people had a future."

McNeil presented the Medal of Bravery to Curtis's husband, Karl, who had spoken to the premier earlier.

"When I was talking to Karl, his response was, 'Well, at least three young people will have a future.' Even though I never met Anne, I'm absolutely certain that as she looks down over us, that would have been her response."

"That's what she would have wanted. She would have given her life 10 times over to save those kids -- and wouldn't have even hesitated ... That gives us, as a family, a little bit of peace in knowing ... she's being recognized today and that these children have an opportunity to live their lives."

When he saw the flames and smoke, 84-year-old Jerry Spargo thought it might have been the television.

Spargo had been heading outside to shovel his driveway on Jan. 13, 2016, when he saw some commotion in the living room of Mary Jayne Tilley's home across the street.

He paused a moment and realized it was a fire -- and that Tilley had multiple sclerosis and was unable to walk.

"Thank God the front door was unlocked," he said after receiving a Medal of Bravery at a ceremony at Province House in Halifax on Wednesday.

"I went in the hall, and the living room was just like a furnace: black smoke, mostly upholstery and plastics burning, and flame."

She had been smoking, he said, and using a candle to mask the tobacco smell. The candle had tipped over, setting her clothes ablaze.

"She has MS quite bad, so it was a bit of miracle she was able to get her clothes off. She was badly burned, and inhaling the black smoke, which was pretty toxic stuff," he said.

Spargo said he's not the emotional sort, but he had to ask himself whether he was really in a burning house or just in a dream.

"I'm 84, so I couldn't pick her up, so I reached down and grabbed her wrist and walked backwards out the front door, and set her down in the snow and ice."

Irene arrived with a parka, and someone else found a blanket.

Tilley spent weeks in a burn unit, and has since moved to a home outside the city. But she went to Halifax Wednesday to watch her longtime neighbour win honours for saving her life.

"Well I know the girl quite well. We lived across from her for quite a few years, and I sort of tried to do whatever I could for her," Spargo said.

"Life is a gamble and I was in the right place at the right time, just sort of a fluke, I guess. But I knew what to do and I did it."

Nicole Foran doesn't really know what prompted her to grab the hijacker's gun, but the former CanJet flight attendant says she had enough of being trapped on a plane with a mad man.

It was early on April 20, 2009 -- eight hours after 20-year-old Stephen Fray bolted past a security checkpoint and boarded the passenger jet in Montego Bay, Jamaica.

Once inside the aircraft, he started waving a pistol and making erratic demands.

En route from Halifax, CanJet Flight 918 was dropping off some passengers in Jamaica before heading to Cuba with 159 passengers.

As she and a family of travellers moved forward, she made a pledge.

"I promised them that I would get them all off the plane safely, and I intended to keep my promise. That was the only thing I cared about at the time," she said as she received a Medal of Bravery Wednesday.

Within 45 minutes, Foran and three other crew members persuaded Fray to release the passengers in exchange for everyone's valuables.

For the next eight hours, the hijacker's moods swung from content and talkative to furious rages, punctuated by angry demands that the plane be refuelled and flown elsewhere.

At one point, the pilot was forced off the plane -- despite his protests -- and ordered to get more fuel.

Foran recalled how Fray was, at times, curious to learn more about his captives from Canada.

"We told him how beautiful the country was," she said. "He said, 'Well, you just do what I say and you get to go back to Canada."'

At another point, Fray was shouting orders at the first officer and a flight attendant who he believed were locked in the cockpit. But both had earlier escaped through a window and were on a baggage belt -- though still taking with Fray.

As the hostage-taking dragged on, Foran said she could see military personnel moving around the plane. Then Fray received a call asking him to determine if a fuel truck was still attached to the wing of the jet.

As he walked past Foran to look through a window, Jamaica's anti-terrorism tactical unit stormed the plane.

In the next instant, Foran could feel the hijacker's gun on her shoulder.

"I knew it was the perfect opportunity. He was stunned that there were so many military (personnel). So I took the opportunity and I took the gun out of his hand."

No one was injured as the soldiers moved in.

Asked what motivated her to take such a risk, she said: "I don't know how it happened. I don't know why I thought of it ... I just knew it was my time to do it. It was eight hours. I had enough. I wasn't going to get shot at this point."

Foran later returned to Jamaica to testify at Fray's trial.

Fray was later sentenced to 20 years in prison.

Foran hasn't worked as a flight attendant since that day, though she now works with Jazz Aviation north of Halifax.