'The virus will find you': Premier angry with Nova Scotians who continue to break the rules

That’s the message Premier Stephen McNeil has for Nova Scotians who are not following the rules and restrictions in place as the province fights the spread of COVID-19.

McNeil had strong words for those citizens Friday, calling them “reckless and selfish” during a news conference in Halifax.

“I’m not trying to scare you, but part of me wishes you were scared. This is serious and another weekend is upon us. I am so tired of hearing of grocery stores, Walmart, Tim Hortons parking lots filled with cars, as if we are not in the midst of a deadly pandemic. We are,” said a noticeably frustrated McNeil.

“To the reckless and selfish, I’m talking to you.”

Nova Scotia declared a state of emergency last month in an effort to prevent the spread of COVID-19. Residents are being urged to stay home as much as possible and to stick to their communities when walking or biking for exercise.

Many businesses are closed, along with all provincial parks and beaches. Essential social gatherings must be limited to five people and residents must practise physical-distancing.

McNeil noted many Nova Scotians are abiding by those rules, but he said too many are not, and he’s losing his patience.

“And then everyone is putting pressure on the public health to solve it, our healthcare system to deal with it, and government to pay for it, when all we have to do is stay the blazes home.”

Nova Scotia’s top doctor echoed the premier’s message, also expressing frustration with those who continue to break the rules.

“It may be challenging, but it's actually not that, in my mind it’s not that difficult to understand stay home as much as possible, stay away from each other. Stop looking for loopholes or reasons to try to get around this, that puts us all at risk.”

The warnings came as the province announced 14 new cases of COVID-19, bringing the total number of cases in Nova Scotia to 207.

Strang says the lab will be testing around the clock this weekend.

Ninety-two per cent of the cases are connected to travel or a known case. One case is confirmed to be the result of community spread and some cases are still under investigation.

“We are now starting to see signs of community spread in Nova Scotia,” said Strang. “I do not believe it’s widespread and we will be, we are continuing to expand our testing to be looking for spread within Nova Scotia, not just based on travel."

Twenty-one people have recovered from the virus. Therefore, their cases are considered resolved. 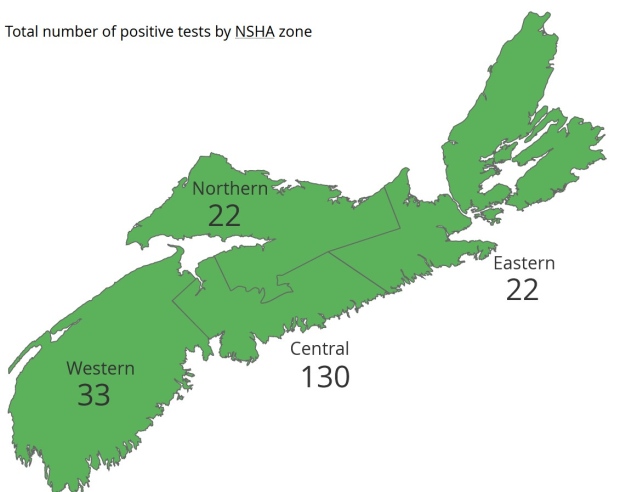 Strang confirmed there are no new cases of COVID-19 at The Magnolia Continuing Care Community in Enfield, N.S.

A total of three staff members and two residents have tested positive for the virus at the long-term care facility.

Strang said health officials are still investigating the source of the cases in the facility, but they do know there was an educational event for staff, as well as a family gathering on March 11, which was attended by people who live outside of the province.

Public Health is working to identify and test people who may have come in close contact with all of the confirmed cases.