HALIFAX -- Nova Scotia has extended the state of emergency as the province announces 20 new cases of COVID-19.

A state of emergency was first declared under the Emergency Management Act on March 22. It remains in effect until noon Sunday.

The provincial government says cabinet met by teleconference Thursday and agreed to ask the lieutenant-governor to extend the state of emergency for another two weeks.

The order comes into effect at noon Sunday and will extend to noon on April 19.

The request comes as Nova Scotia announces 20 new cases of COVID-19, bringing the total number of cases to 193.

The province says 900 tests were completed at the QEII Health Sciences Centre's microbiology lab on Wednesday.

Dr. Robert Strang, Nova Scotia’s chief medical officer of health, says 91 per cent of cases are connected to travel or a known case. One case is the result of community transmission and some cases are still under investigation.

“We are seeing more and more cases that it’s likely that it’s community transmission and that’s likely to be confirmed in the days ahead,” said Strang during a news conference Thursday.

“This is not a surprise. This is exactly how COVID-19 plays out. We get it from travel, it starts to get into communities. This is the time when all the public measures need to really clamp down to minimize the spread within Nova Scotia communities.”

The confirmed cases range in age from under 10 to over 80.

Sixteen people have now recovered from the virus and their cases are considered resolved. 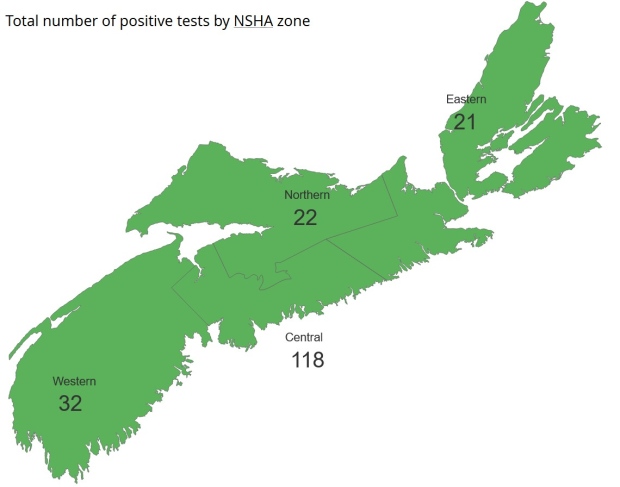 “I don’t want people to focus on whether this community or that community has cases,” said Strang.

“We have to understand that there is potential in every community in the province and we need all Nova Scotians, no matter where they live, to be taking the necessary protective steps.”

Public Health is working to identify and test people who may have come in close contact with the confirmed cases.

That includes people who were at the Eagles Funeral Home in Westville, N.S., or the Alma Fire Hall in Alma, N.S., on March 15.

“There was an individual who attended that event that was not symptomatic but subsequently became ill and tested positive,” said Strang.

Anyone who was at those locations on March 15 and developed COVID-19 symptoms, such as fever, cough or difficulty breathing after that date should call 811.