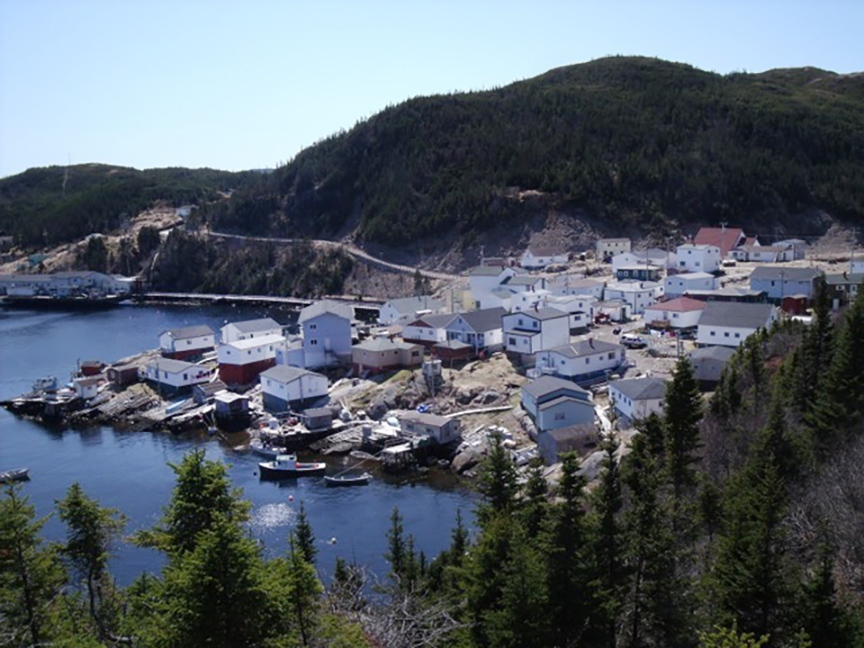 The residents of Gaultois, a tiny town along Newfoundland's southern coast shown in this handout photo, are considering whether or not to resettle through the provincial government's community relocation program. (THE CANADIAN PRESS/HO-Courtesy of Gaultois Inn)
GAULTOIS, N.L. -

Residents of a former fishing village along Newfoundland's remote southern coast are considering whether to pack up and leave everything behind -- for good.

The people of Gaultois, N.L., have signalled to the province they would like to be resettled through the province's community relocation program -- a controversial government-led practice with roots in the 1950s.

But whether it happens through the program or not, Gaultois Inn manager Susan Hunt says the town will likely be empty in a few decades anyway.

"The community's getting older and there are no young ones," Hunt, 71, said in an interview Tuesday. "People are dying off."

Many in the village are older and getting sick, and they'll need to move toward larger centres to be closer to medical care, she added.

Gaultois is one of five communities along Newfoundland's southern coast inaccessible by road -- to get there, visitors must take a ferry or helicopter. Its population has fallen from what Hunt estimates was about 700 people in the early 1980s to fewer than 100 people.

The town has voted on resettlement before, but the percentage of voters in favour was less than 90 per cent -- the previous provincial threshold to trigger relocation efforts. In October the province lowered that threshold to 75 per cent and residents once again contacted government officials to launch a relocation request.

It's a complicated process, involving several steps. So far, a preliminary vote suggested more than 75 per cent of the 78 respondents wanted to move, the provincial Department of Municipal and Provincial Affairs said in an email Tuesday.

Hunt said the government is determining the residents' residency, adding that people have been asked to complete a form asking how long they have lived in Gaultois and whether they owned their own house and for how long. Residents could be paid up to $270,000 to leave their homes behind.

Resettlement is an emotional issue in Newfoundland and Labrador. Authors like Michael Crummey and visual artists like David Blackwood have made stinging, powerful work about the practice, which has sometimes involved families floating their wooden houses across the ocean to a new community closer to government services.

Hunt said nobody in Gaultois likes to talk about the potential move.

"The subject never comes up," she said -- not even at the recent Canada Day celebration at the community centre.

The provincial government began resettling communities in the 1950s, shortly after the province's Confederation with Canada. The practice accelerated after the 1992 moratorium on commercial cod fishing, which wiped out jobs and livelihoods for over 30,000 people.

Hunt said she moved to Gaultois in the 1960s when she was a teenager. Her father worked on fishing trawlers that sailed out of the community, and he wanted his family to be close when he returned from his trips, she said. There was a fish plant operating in the town when she arrived, and most people worked there or on the boats.

"The place was booming then," she said.

The plant was operated by several companies over the years before it closed for good in 2009. There are now four students left at the school, though a local woman had twins 18 months ago, Hunt said.

Still, the Gaultois Inn does fairly well -- a lot of people from across the province and the country who are curious about the town come to stay, she said.

Hunt wasn't keen to speak about how she felt about resettlement.

"I'll go with the flow," she said. "I'm not going to say I'm against it or I'm for it; I'll just go along with everybody else."

Transport Minister Omar Alghabra told the House of Commons transport committee the COVID-19 pandemic and resulting labour shortages are to blame for the significant wait times at Canadian airports, and said the ArriveCAN app is here to stay.

A 81-year-old Danish woman traveling from Africa to Canada was arrested at Warsaw airport on suspicion of illegal possession of heroin worth over US$515,000, officials in Poland said Friday.

A prominent Quebec cardinal is denying sexual assault allegations against him contained in a class-action lawsuit that was formally filed this week in Quebec Superior Court.