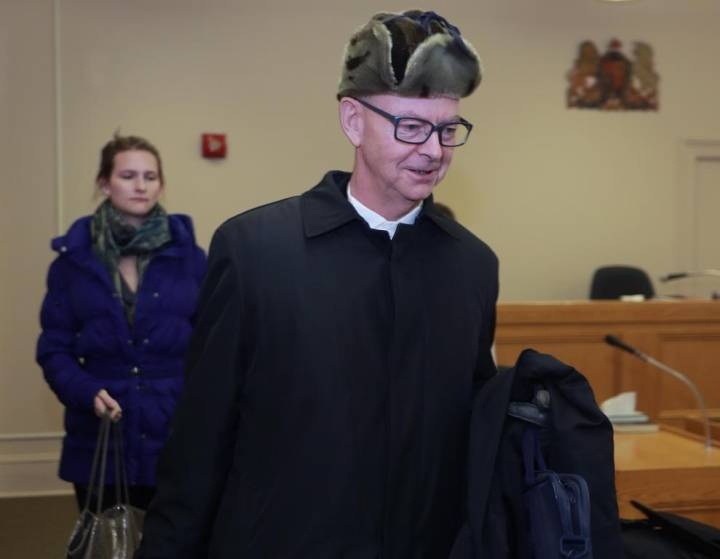 Lawyer Ches Crosbie arrives at the Supreme Court in St. John's on Tuesday, Nov. 18, 2014. As the son of retired political heavyweight John Crosbie, Ches Crosbie presents Newfoundlanders and Labradorians with a familiar name as he seeks to become the province's next premier in the May 16 election. (Photo: Paul Daly, The Canadian Press)

ST. JOHN'S, N.L. -- As the son of retired political heavyweight John Crosbie, Ches Crosbie presents Newfoundlanders and Labradorians with a familiar name as he seeks to become the province's next premier in the May 16 election.

But the Tory leader is not the only Progressive Conservative hopeful from the storied family -- his sister Beth Crosbie is running for the party in a neighbouring district in the provincial capital.

In all, there are three pairs of siblings running for office this election, including two brothers representing rival parties.

Beth said she's been impressed watching her older brother, a lawyer who became party leader a year ago, step into public life. She said she's confident he'll make a great premier, but she waved away the suggestion that Ches inspired her to enter the race.

"I ran in 2015, so I would like to think that I inspired him," she said with a laugh in a recent phone interview. She finished second in the district behind Liberal candidate Bernard Davis last time around.

The Tory leader's Liberal opponent in the St. John's district of Windsor Lake is political rookie Bob Osborne, brother of incumbent Liberal Finance Minister Tom Osborne, who is seeking re-election in a district he has represented since 1996.

Brothers Jim and Paul Dinn are running in different districts for opposing parties, with PC incumbent Paul seeking re-election in Topsail-Paradise and Jim after the St. John's Centre seat for the NDP.

While Ches is touring the province, Beth has been focusing her efforts on door-knocking in her district of Virginia Waters-Pleasantville.

The retired realtor said her family ties to her party's leader haven't come up much when meeting with voters, many of who are already familiar with her after her 2015 bid.

"I sometimes get people, especially if I'm talking to them on the phone, mixing the names up," she said, "because Ches and Beth sound the same ... if you're a little bit hard of hearing or on a cell phone."

She said it's too early to say what kind of role she'd take on if elected, but she'd be glad to pitch in on initiatives to bring more young people and women into politics, or in the area of culture and tourism.

John Crosbie had a long career as a federal Conservative cabinet minister and later as lieutenant-governor of the province. But despite her front row seat growing up, Beth Crosbie didn't always aspire to politics.

She said watching her father's political career taught her the importance of being true to oneself. "He always knew he was doing what he believed in, and you could always fully support him and be proud of him because of that," she said.

As Thursday's election nears, the younger Crosbie said she plans to keep busy connecting with voters.

She lives in her brother's district of Windsor Lake and voted for him in the byelection he won last September, but she is eligible to vote for herself in her own district this time around.

"I'd be happy to vote for Ches, he's certainly the man I'd like to see in Windsor Lake, but more than likely I will be voting for myself instead," she said.