ALBERT BRIDGE, N.S. -- When an alpaca wore a tuxedo to a Texas wedding, it was no surprise when a photo of the guest of honour went viral.

In its formal best, the furry creature looked pretty sharp. Now a Cape Breton alpaca farm is getting some requests of its own.

As wedding guests go, alpacas are among the friendliest, most approachable animals in the world, but a Peruvian alpaca isn't exactly what you'd expect to see walking down the aisle.

Bob Silverstein, who runs Albert Bridge Alpaca Farms on the banks of the Mira River, says the trend is reaching Nova Scotia. 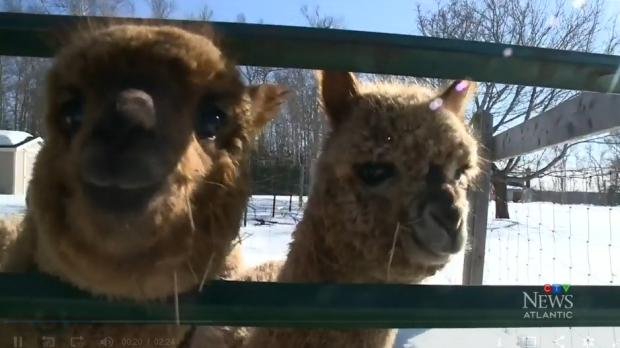 "We got a phone call from someone from Europe, and that person asked us to reserve a date in August for a wedding," Silverstein said.

One idea led to another, and now there are tentative plans for some of the animals at Silverstein's farm to take part in the couple's big day.

"We have some animals that can be trained for that, and we'll be able to give them the opportunity to walk down the aisle," Silverstein said.

Last year, another couple expressed interest in stopping by Silverstein's farm and taking some wedding pictures, but actually having the animals as part of the ceremony that's altogether different.

"It is hilarious," Silverstein said. "I mentioned it to a few people I knew, and they started laughing themselves silly.  And they said, 'you are kidding, right?'"

But it's no joke.

So why would people want animals like these around on their big day?

Silverstein, who is originally from New York, says alpaca weddings are growing in popularity in the U.S.

"They would make good wedding guests, and they would actually look pretty appropriate when they're dressed up in their veils and their groom hats," Silverstein said.

If all things go as planned, the first Alpaca wedding on Cape Breton Island -- to Silverstein's knowledge, anyway -- will go ahead this August.

If it's a success and they have more requests like this in the future, Silverstein says it would be good for his business.

He's working on other ways to get these unique, friendly creatures out in the public, too, maybe even the odd nursing home visit.

"We're involved in that as well," Silverstein said. "We want to make sure we're using the animals in a lot of affectionate ways."