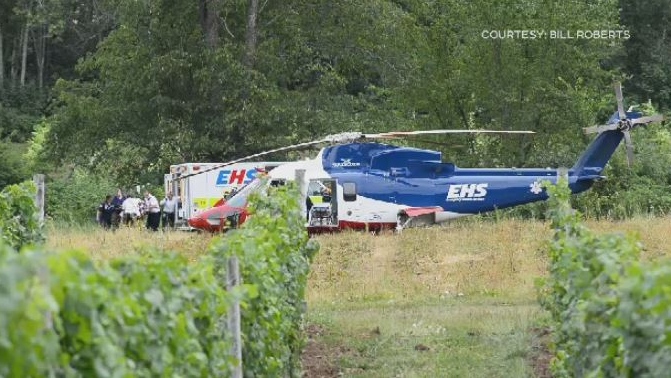 A LifeFlight helicopter arrives at the scene of a serious crash in Nova Scotia's Kings County on Aug. 19, 2019. (Bill Roberts)

Two men are in hospital with serious injuries after a single-vehicle collision at a worksite in Nova Scotia’s Kings County.

The RCMP responded to the commercial property in White Rock, N.S., shortly after 2 p.m. Monday.

Police say a vehicle that had been carrying large rocks lost control and went into a wooded area on the property.

The driver, a 51-year-old man from Centreville, N.S., was airlifted to hospital in Halifax with what are believed to be life-threatening injuries.

A second man jumped from the vehicle. He was taken to the Valley Regional Hospital with serious, but non-life-threatening, injuries.