'We are flattening the curve': N.S. reports only 1 new case of COVID-19 for second day in a row

HALIFAX -- Nova Scotians may be flattening the curve of COVID-19, but the premier and the province’s top doctor said it’s still too early to ease restrictions, and is urging them to remain vigilant.

For the second day in a row, Nova Scotia reported only one new case of COVID-19 on Tuesday.

“As our testing continues we are flattening the curve when it comes to COVID and seeing the number of positives go down,” said McNeil during a news conference in Halifax Tuesday afternoon.

“We need to continue to work to make sure that we flatten this curve so that we can move back to … somewhat of a normal life, so I ask you to continue to do the great work that you’ve been doing over the last number of weeks.”

“I want to caution everyone against reading too much into any single day or any few days,” said Strang. “We are in a long-term situation and need to have sustained changes before we can make definitive conclusions.”

Strang said Nova Scotia needs to see a trend of little to no cases for at least two weeks -- ideally 28 days -- before it can begin a recovery strategy.

He also said that the province will focus on community-based cases when developing its reopening plan, and that the situation at Halifax’s Northwood long-term care home will be considered separately.

The province said Tuesday that 864 people have now recovered from the virus, which leaves 108 active cases.

Forty-eight Nova Scotians have died from COVID-19. Forty-two of those deaths have been at Northwood, which has seen the most significant outbreak in the province.

McNeil extended his condolences to the families of the two Northwood residents who have died since Friday.

Confusion around the numbers

On Tuesday, the province reported that 864 people had recovered from the virus. When accounting for the 48 deaths, this leaves 108 active cases in the province.

However, in the same news release, the province reported that Northwood has 157 residents and eight staff members with active cases of COVID-19, for a total of 165 active cases at that facility alone.

Strang addressed the discrepancy during Tuesday’s news conference, explaining that the data from long-term care homes comes from a different data source than the one used by public health, and is on a different timeline.

“In the last 24 hours, public health has worked very hard to resolve a large number of cases and move them from the active category to the recovered category,” said Strang.

“That same work has not yet been able to be done specifically with that long-term care data source.”

Strang said work is underway to resolve the issue so that the two data systems become more consistent.

For now, Strang said the provincial numbers provide a more accurate snapshot of the province’s current state when it comes to COVID-19.

“If people are looking for the source of truth, the true number and the number of active cases is the provincial number, not the long-term care number, which lags behind,” he said.

Two other long-term care facilities in the province each have one active case of COVID-19 at this time, though the facilities have not been identified.

Nova Scotia’s confirmed cases range in age from under 10 to over 90.

The latest case, announced Tuesday, was confirmed in the Nova Scotia Health Authority's central zone. The central zone contains the Halifax Regional Municipality and has seen the largest number of cases in the province. 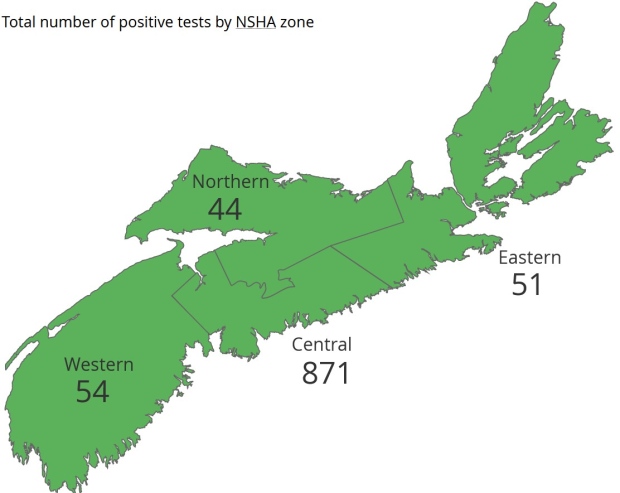 Students can collect belongings from schools

Nova Scotia schools will remain closed for the remainder of the school year, but students will soon be able to gather any personal belongings they may have left behind.

Strang said, beginning the week of May 25, a single student or a family member can access their local school and collect their belongings.

“Access to schools will be by appointment to ensure that we can respect the public health principles of social distancing and limited numbers,” said Strang.

School officials will be in touch with students and families to provide more details on how to make an appointment to access a school.

Schools have been closed since March break to curb the spread of COVID-19. The school year will officially end on June 5, with students continuing their education at home until then.

When and how will the COVID-19 pandemic end?

Seniors being sent one-time payment of up to $500: PM

Who is eligible for the Canadian government's new COVID-19 aid for seniors?

What parents should consider before sending children back to school

Why people are drawn to COVID-19 conspiracy theories

Fauci warns of 'suffering and death' if U.S. reopens too soon

Beach bummer: novel coronavirus can live in water, but is it infectious?