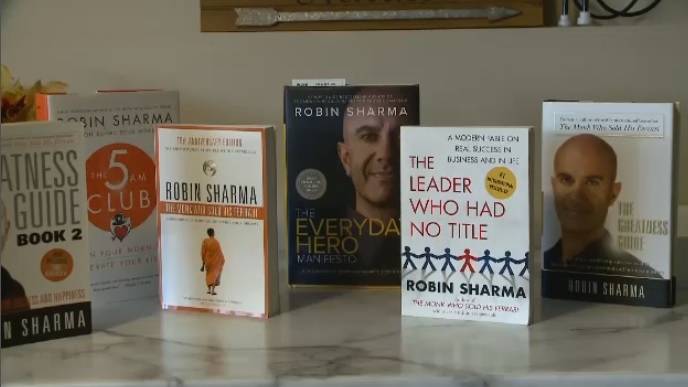 Self-help author Robin Sharma is one of the leading voices in the world on personal development and his books have sold millions of copies in nearly 100 countries.
Port Hawkesbury, N.S. -

Self-help author Robin Sharma is one of the leading voices in the world on personal development and his books have sold millions of copies in nearly 100 countries.

And when Sharma is asked where he is from, the answer often surprises people.

"Port Hawkesbury, Nova Scotia," affirms the author and motivational figure who is currently based in Toronto.

The author of bestsellers like The Monk Who Sold His Ferrari spent more than eight years growing up in this Cape Breton community just across the Canso Causeway. Sharma says his small-town roots helped shape him.

"The smell of the Atlantic Ocean -- I will never get that smell out of my spirit," Sharma said.

Later in his childhood, while living in Dartmouth, Sharma met another person who he still credits with playing a major role in his life.

"And she saw something in me that very few people saw. She saw that sparkle and she encouraged me."

Port Hawkesbury's mayor admits she's just learned herself that Sharma hails from the town, but adds they have no problem claiming him.

"Wow, he's just an incredibly accomplished author," said Brenda Chisholm-Beaton. "And I have reached out to him in the hopes that next time he's on Cape Breton Island that we can get together for a coffee."

Sharma's latest book, The Everyday Hero Manifesto, was released earlier in September. It’s currently among the best-sellers online in categories pertaining to leadership and personal growth.

Over the years, Sharma has rubbed shoulders with some of the biggest names in the world. Despite his own lofty achievements, he says the idea that each of us has the ability to do something great is a sentiment that could help many during the COVID-19 pandemic.

"Christopher Morley said it well. He said, 'We can curse the darkness, or we can light the candle.' And I think each of us has the power to be everyday heroes. By doing our part to build a better world."