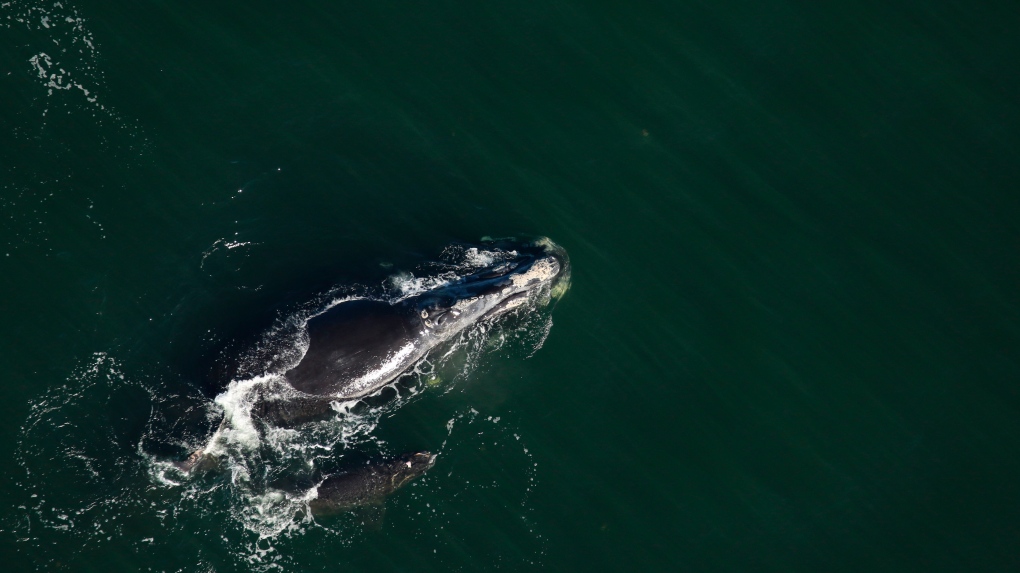 This photo taken by an aerial survey team for the Florida Fish and Wildlife Commission shows an injured right whale calf swimming alongside its mother about 8 miles off the coast of Georgia on Wednesday, Jan. 8, 2020. Conservationists say the newborn right whale was suffering from deep cuts on either side of its head, dismaying conservationists who closely monitor the southeast U.S. coast during winter for births among the critically endangered species. ( Florida Fish and Wildlife Commission via AP)

SAVANNAH, GA. -- A newborn right whale spotted off the coast of Georgia was suffering from deep cuts on either side of its head, dismaying conservationists who closely monitor the southeast U.S. coast during winter for births among the critically endangered species.

The S-shaped gashes, roughly 60 centimetres apart, were likely inflicted by the propeller of a fishing boat or similar vessel, said Barb Zoodsma, who oversees the right whale recovery program in the U.S. Southeast for the National Marine Fisheries Service.

She said Thursday that humans may be helpless to do anything to treat the injured calf.

"If this was a human baby, this calf would be in the NICU right now," Zoodsma said, referring to a hospital's intensive care unit for babies. "It's highly unlikely that we can fix this animal."

Scientists estimate only about 450 North Atlantic right whales survive. Each winter, females migrate south to the shallow, warmer Atlantic waters off Georgia and Florida to have their babies.

The injured calf is the fourth that's been spotted since mid-December. An aerial survey team saw the calf and its mother swimming Wednesday about 12.8 kilometres off the Georgia coast. Zoodsma said the survey team didn't realize the calf was hurt until later, when photographs taken from the air were viewed at full size on a large screen.

She said the photos showed one gash left a loose flap of skin on the whale calf's head that would be difficult to heal. The newborn also suffered a cut to its mouth, which Zoodsma feared could impair its ability to nurse and feed.

She estimated the calf is about a week old and measures three to 4.5 metres long.

Whale experts were discussing potential options for trying to help the injured calf. But they appeared to be limited.

In some cases, conservationists have been able to inject injured right whales with antibiotics using needles fired from an air gun, Zoodsma said. But those are designed for use on large adults, not newborns.

Also, scientists worry that any attempt by humans to get close could stress the whale calf and make its condition even worse. Plus there's a risk of angering its mother.

"This is an injured newborn calf and how would the mom react to us approaching it?" Zoodsma said. "The mom could be very defensive and aggressive."

Boat strikes and entanglement in fishing gear are the leading killers of right whales. Zoodsma urged fishing boat crews and recreational boaters heading south for the winter to slow down and use extra caution, as right whales are often difficult to see even swimming just below the water's surface.