She also said the province has the first confirmed case in Zone 7, the Miramichi region.

The new cases are:

The confirmed cases are reported based on where the testing is, not where the person lives, Russell said.

Russell reminded the public to only get information from credible sources.

"Let's work together so that the truth is not yet another casualty of the COVID-19 pandemic," Russell said.

She also reminded people to not gather in groups of more than five people in public. Russell said five people from a church group have tested positive for COVID-19.

"Having mass gatherings limited is important and this is an example of why. It’s important to follow advice and rules put in place to protect all of us," Russell said. "It is vital that every new Brunswicker maintain physical-distancing. When I am telling you that staying home will save lives, I am telling you the truth."

Russell said public health officials are taking steps to inform the church community and will stay in regular contact with those at risk for being infected.

"All the members of the church were notified," Russell said.

In other news, Russell said there are about 450 calls a day to the 811 line. Half are focused on COVID-19, and about 45 of them fit the current criteria for testing.

New Brunswick Premier Blaine Higgs said the province wasn't going to start closing every green space, but said it is the responsibility of the owner to ensure that people respect the gathering limit and maintain physical-distancing.

He said anyone who doesn't will be charged.

"This pandemic is unlike anything we have ever seen before," Higgs said.

“This donation is one example of the how the people in this province are coming together to support one another,” said Higgs. “I thank the many generous donations that have been made to the foundation. Every dollar will make a difference during this crisis.”

The donation will make it possible fo seven locations across New Brunswick, in both regional health authorities, to have the capability to find out the results of COVID-19 tests faster. Sites will include: Edmundston, Campbellton, Bathurst, Miramichi, Moncton, Fredericton and Saint John. 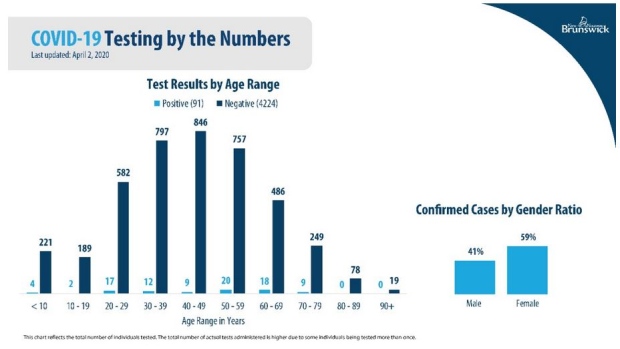 It will also pay for the purchase of two portable "extracorporeal membrane oxygenation life support systems," the government announced in a new release.

"As COVID-19 is a respiratory illness, lung capacity and function can be severely affected. These machines oxygenate the blood, allowing the lungs to rest," the release said.

Higgs also provided an update on the workers emergency income benefit, the one-time $900 payment to fworkers or self-employed people in New Brunswick who have lost their jobs due to the state of emergency.

Higgs said that so far 50,700 individuals have registered for the program which is being administered by the Red Cross.

“This number illustrates just how critical this program is,” said Higgs. “We will continue to find ways to cover any gaps, to protect our workers and our economy.”

Premier Blaine Higgs:
-temperatures are now being taken of all workers at long-term care facilities
-training has begun and homes equipped to help long-term care workers test seniors who are symptomatic.