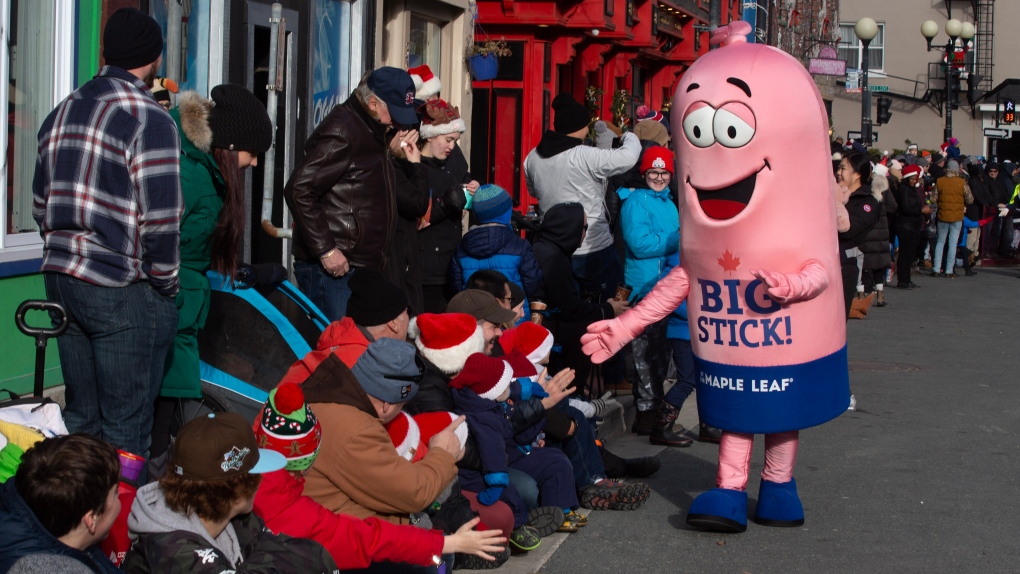 The Maple Leaf Big Stick Balogna interacts with a people during the St. John's Downtown Christmas Parade in St. John's on Sunday December 4, 2022. The Maple Leaf Foods Mr. Big Stick mascot is a waving, walking, cylindrical stick of bologna -- complete with a top knot -- which has been a staple of the city's parade for over 25 years. (THE CANADINA PRESS/Paul Daly)
ST. JOHN'S, N.L. -

Kids and adults alike waved, cheered and scrambled to get selfies with the star of the annual Christmas parade in downtown St. John's, N.L., on Sunday morning.

But it wasn't the man in red they were after; their man's suit was a mild, intestinal pink.

The Maple Leaf Foods Mr. Big Stick mascot is a waving, walking, cylindrical stick of bologna -- complete with a top knot -- which has been a staple of the city's parade for over 25 years. According to the meat company, Mr. Big Stick is unique to Newfoundland, and the St. John's parade is his main regular gig.

Gaylynne Gulliver, spokesperson for Downtown St. John's, the city's business association, said it's tough to pin down exactly why the Big Stick mascot is such a draw.

"I think that it's just so random and ridiculous," she said in a recent interview. "He's a baloney with arms and legs, and it's just really funny!"

She said she'd never imagined she'd spend so much of her career fielding questions about a person dressed up as a tube of processed meat.

Maple Leaf doesn't track bologna sales by province, but the company said in a recent email that Atlantic Canada is by far the largest consumer of its Big Stick product. The mascot has been around since 1987, and it's been taking part in the Christmas Parade for over 25 years.

"Maple Leaf Foods recognizes the affinity, love and nostalgia that Newfoundlanders have for Big Stick as it is unofficially part of the fabric of Newfoundland," the company said.

Though most Canadian consumers might know bologna as a lunch meat packaged in thin slices, in Newfoundland and Labrador the meat has a different form. Consumers can buy intact logs -- they're sold in in 1.2 or 4.5-kilogram formats -- and slice it themselves. Or they can head to their local corner store where the clerk will slice it -- "thick or thin?" -- and price it by the pound.

Amanda Pierce works at Whites Mini Mart, which is one of several St. John's convenience stores selling bologna, and she said people get "super excited" about it.

"We can sell upwards of four Big Sticks a week, if not more," Pierce said in an interview. "I think it's an easy meal. You can make a quick sandwich, or quick fry it up, you know what I mean?"

Pierce said she doesn't eat bologna much herself, but when she does, she likes it barbecued or served with eggs for breakfast.

Gulliver agrees that bologna is a "way of life" in the province, which could help explain why adults with no children regularly head to the parade to high-five Mr. Big Stick.

"He's become nothing short of a phenomenon," she said. "There's T-shirts, Christmas ornaments, keychains ... there are so many pictures that are taken of him."

Though Maple Leaf said the reception each year makes the man in the bologna suit feel like a "rock star," his identity is kept quiet.

"He's a baloney of few words," she said.

This report by The Canadian Press was first published Dec. 4, 2022.