HALIFAX -- The number of COVID-19 cases in Nova Scotia has surpassed 500 as the province reports 43 new cases of the virus.

This is the largest one-day spike in COVID-19 cases in the province so far and brings the total number of confirmed cases to 517.

The QEII Health Sciences Centre's microbiology lab completed 1,476 tests on Monday and is operating around the clock.

Fifty-three per cent of cases are female and 47 per cent are male.

Both women died at the Cape Breton Regional Hospital in Sydney, N.S., but Chief Medical Officer of Health Dr. Robert Strang has said the cases were not connected.

The province’s third COVID-19 death was a man in his 80s, who died at the Admiral Long Term Care Centre in Dartmouth, N.S. on Monday.

The province says 124 people have recovered from the virus and their cases are considered resolved.

The central zone, which contains the Halifax Regional Municipality, has seen the largest number of COVID-19 cases. All 43 new cases reported Tuesday were confirmed in the central zone. 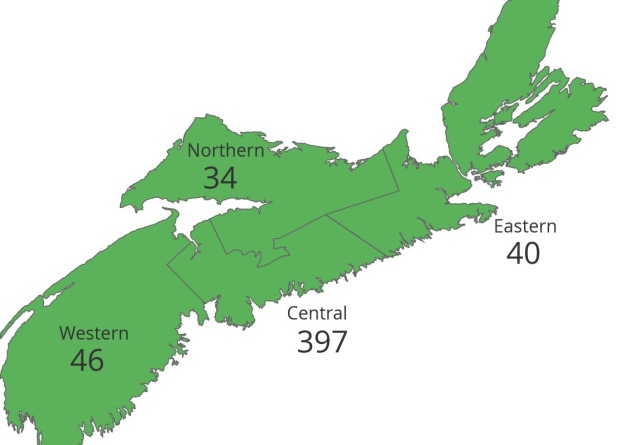 'I was horrified': Family had to rush woman out of Toronto care home struck by COVID-19

Ontario public schools will not reopen on May 4, premier says

What does COVID-19 look like? A closer look at the grey and red image that symbolizes a pandemic

How to look and sound your best while video conferencing

New Normal: Will COVID-19 mark the death of the handshake?