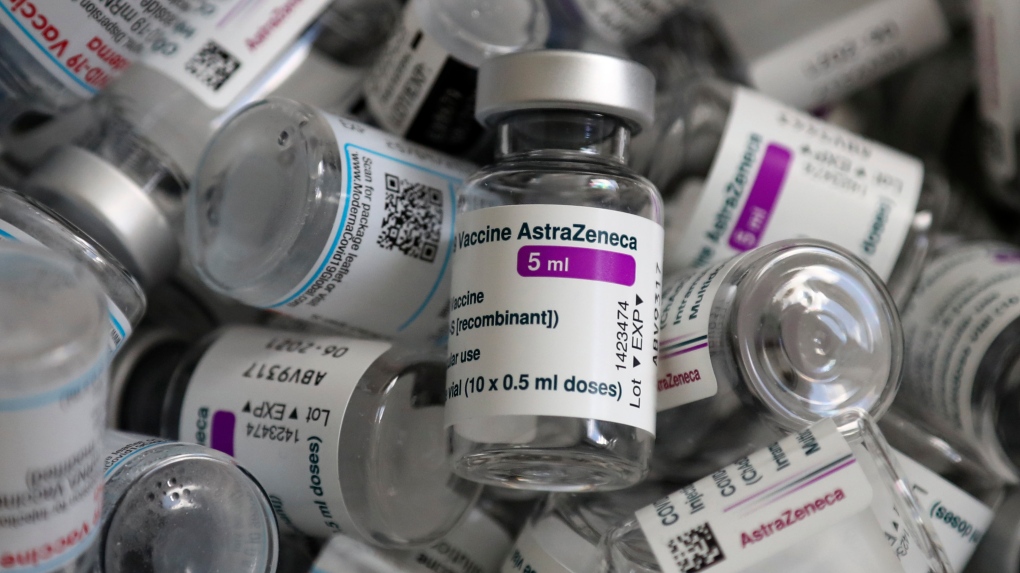 An infectious disease specialist says the thousands of doses of Oxford-AstraZeneca vaccine that have expired in Canada is a small price to pay to ensure there's an adequate vaccine supply in the country. (AP Photo/Matthias Schrader)
FREDERICTON -

Provinces in Atlantic Canada have had to dispose of thousands of doses of Oxford-AstraZeneca COVID-19 vaccine in recent weeks after demand dried up and they expired.

Prince Edward Island announced this week it had disposed of 3,200 expired AstraZeneca doses, and Newfoundland and Labrador confirmed Thursday it has nearly 2,900 doses that will go to waste.

But an infectious disease specialist says the number of doses allowed to expire in Canada is a small price to pay to ensure there's an adequate vaccine supply in the country.

Dr. Allison McGeer of Mount Sinai Hospital in Toronto said it is better to have too much of a particular vaccine than to turn people away because supply is lacking.

"We deliberately overbought vaccines, because we knew that with that many different vaccines coming, there were bound to be issues with one or more of them, and some of them we wouldn't get at all," McGeer said in an interview Thursday.

She said while provinces like Prince Edward Island doses of the AstraZeneca vaccine that are going to waste after expiring earlier this month are a relatively tiny amount in a world that needs billions of doses. "We have worked hard across the country to not waste vaccines, but it is not realistic to think we are not going to waste some," McGeer said.

Last month, the National Advisory Committee on Immunization recommended that people who received AstraZeneca for their first dose should get one of the mRNA vaccines, Pfizer-BioNTech or Moderna, for the second dose.

Canada's Chief Public Officer of Health, Dr. Theresa Tam, said German studies show mixing vaccines is more effective than two AstraZeneca shots. And she said it would also mitigate any potential risk of the rare blood-clotting disorder known as VITT that has been linked to AstraZeneca.

Ron Ryder, a spokesman for the P.E.I. Health Department said the excess doses of AstraZeneca in his province were offered to other provinces before they expired.

"Since NACI changed their guidance on (AstraZeneca), there has been minimal uptake from Islanders for the (AstraZeneca) vaccine," he said in a statement Thursday. "A limited supply has been kept on hand on P.E.I. for those who are unable to have an mRNA vaccine,"

"Until last month, we had not had any vaccine reach its expiry date before it could be administered," Shawn Berry, a spokesman for the New Brunswick Health Department, said in a statement. He said the province is in discussions with the federal government to see about redistributing doses that are not required in New Brunswick.

The government in Newfoundland and Labrador was able to transfer 1,400 doses of AstraZeneca to Ontario in mid-May for use there as they neared their expiry date. However, the province had 2,848 doses of the vaccine expire at the end of June, Lesley Clarke, a spokeswoman for the Health Department said Thursday.

In Nova Scotia, health officials said they received 60,000 doses of AstraZeneca and had to dispose of just 299 that expired.

"At this time, Nova Scotia does not intend to order any further AstraZeneca given the low interest in the vaccine. For those with allergies related to the mRNA vaccines that may need to consider AstraZeneca, we will address those on a case-by-case basis," Heather Fairbairn, a media relations adviser for the province said in a statement.

Elsewhere, Manitoba officials said they had to get rid of fewer than 550 of the 84,000 doses of AstraZeneca that were sent out for distribution.

In Alberta, health officials confirmed that due to decreased demand, 3,947 doses of AstraZeneca expired at the end of June. Government spokeswoman Lisa Glover noted the amount is a small fraction of the more than 292,000 doses administered to date.

"Emerging evidence about the effectiveness of receiving a Moderna or Pfizer vaccine, either as a complete series or following a first dose of AstraZeneca, led to a sharp decline in Albertans seeking second doses of AstraZeneca," she said.

Canada secured 20 million doses of AstraZeneca through an advance purchase agreement, but demand for the vaccine has dropped as the supply of mRNA vaccines increased.

This report by The Canadian Press was first published July 15, 2021.

With files from Kelly Geraldine Malone in Winnipeg and Fakiha Baig in Edmonton.