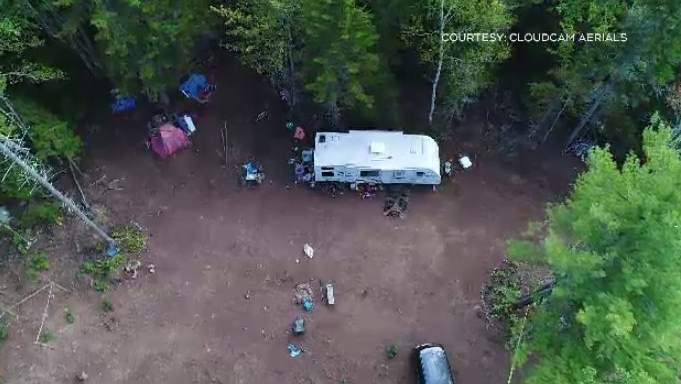 Drone footage from the scene in Millvale, N.S. offers little insight, with no obvious damage to the newer model travel trailer, children's bikes and other items outside. (Photo courtesy: CloudCam Aerials)
MILLVALE, N.S. -

Nova Scotia RCMP say the autopsies are complete for the family of six that died in a trailer fire in Millvale, N.S., over the weekend.

The Mounties said today in a news release the provincial fire marshal's office continues to investigate the cause of the blaze.

They say the evidence gathered so far indicates the fire was not suspicious.

Authorities responded to a call about the fire on Sunday evening and found the family of six from Amherst, N.S, dead in a Passport Ultra Lite trailer.

The town of Amherst has put up a memorial for the family to allow loved ones and residents to pay their respects.

A former student armed with a semi-automatic pistol and a revolver who killed four people and wounded 12 in two schools in Brazil had a swastika pinned to his vest and had been planning the attacks for two years, police said.