Convoy of trucks gather at N.B./N.S. border to show frustration over vaccine mandates 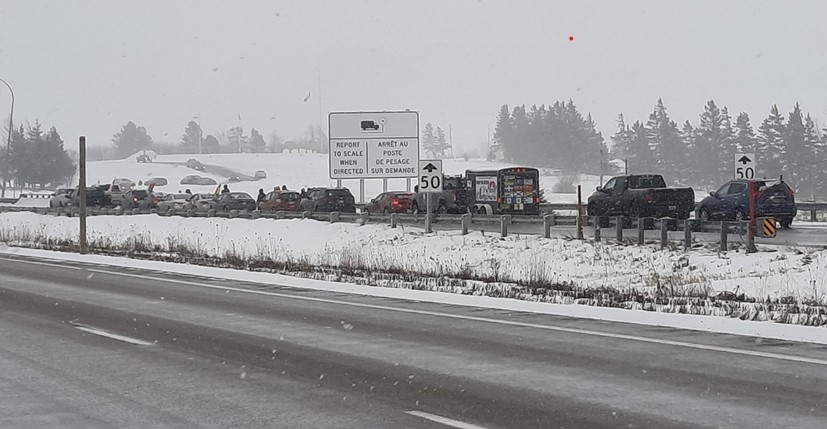 There were several protests against COVID-19 restrictions in the Maritimes on Sunday, including a significant convoy at the New Brunswick and Nova Scotia border.

“As a Canadian citizen or Canadian however you want to call it, new Canadian, whatever, we want everybody to have free choice. Choice of body, choice to decide for yourself. We don’t want business to shut down and people starving because it’s not fair,” said Travis Macleod, who was part of Sunday’s convoy.

The event was organized by truckers as a way to show their frustration with vaccine mandates brought on by the COVID-19 pandemic.

RCMP were on scene to monitor the situation and keep the peace.

Traffic was slow moving at the crossing, as vehicles blocked one lane but left another open to allow traffic to trickle through.

Demonstrators said the event is all about rights.

“We hope to get awareness. Awareness that there are more than just a few people that want freedom of choice,” said MacLeod. “We’re trying to raise awareness for each individual to have their individual rights of freedom, of choice, for your person, your body, your business, your kids.”

Macleod said he is headed to Ottawa for an event called Freedom 2022.

Saskatchewan’s Nakaylia Tudway-Cains is one of many mothers in Canada feeling the strain of the ongoing baby formula shortage, and she says she's now paying $400 a month for special over-the-counter formula she needs for her allergic son.

A 911 dispatcher has been placed on leave and may lose her job after allegedly hanging up on an supermarket employee hiding during this weekend's shooting rampage in Buffalo, New York.

The Conservative Party is doubling down on its call for the federal government to do away with travel restrictions and revert back to 'pre-pandemic rules' in light of recent airport delays.