HALIFAX -- As the number of new COVID-19 cases remains low in Nova Scotia, day surgeries are set to resume in the province next week.

“This is a good start,” said McNeil during a news conference in Halifax.

“For those of you that had appointments booked, it is our collective hope that you will have them rescheduled in the very near future.”

McNeil said Health Minister Randy Delorey and his department will continue working with provincial health partners to gradually open up the health-care system.

Another death at Northwood

The province also announced Wednesday that another resident at Halifax’s Northwood long-term care facility has died from COVID-19.

Fifty-seven people have now died from the virus in Nova Scotia and 51 of those deaths have been at Northwood.

“On behalf of all Nova Scotians I want to offer my condolences to the family of the loved one who passed away at Northwood yesterday,” said McNeil.

Northwood -- the largest long-term care facility east of Montreal -- has seen the most significant outbreak of the virus in the province.

As of Wednesday, the facility was reporting a total of 341 confirmed cases of COVID-19 involving 244 residents and 97 staff members, though most have now recovered from the virus.

Nova Scotia also reported one new case of COVID-19, bringing the total number of confirmed cases in the province to 1,045.

This is the second day in a row that Nova Scotia has announced one death and one new case of the virus.

Nova Scotia has seen a steady decline of new cases and a significant increase in recoveries since the beginning of the month, with the province reporting new cases in the single digits since May 5.

“For the first time, we are reporting no new cases outside of Northwood for two days in a row,” said Strang.

“That’s good news. We’re continuing our good progress, but we still need to continue to watch that epidemiology unfold over the coming days.”

Of the 1,045 cases, 956 people have recovered from the virus and their cases are considered resolved.

This leaves 32 active cases in the province and 23 of those cases are linked to long-term care homes.

Northwood currently has 19 residents and three staff members with active cases of COVID-19.

One other facility has one resident with an active case of the virus.

This leaves nine active cases outside of long-term care homes.

There are eight people in hospital and four of those patients are in intensive care units.

The latest case was confirmed in the Nova Scotia Health Authority’s central zone, which has seen the largest number of COVID-19 cases. 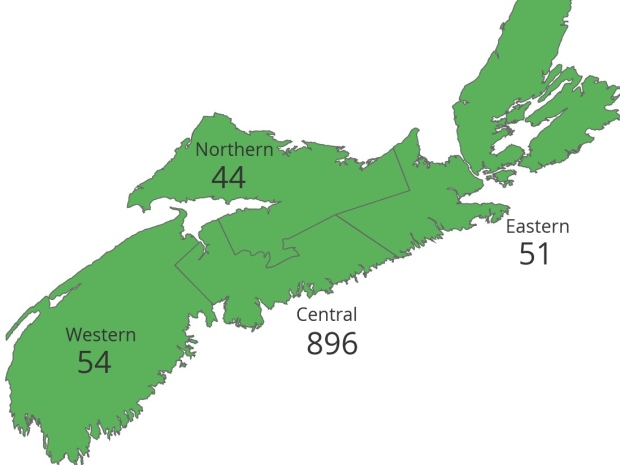 Strang provided some insight Wednesday as to what Nova Scotia’s “new normal” will look like over the next few months.

He said it’s important to note that, while the first wave of COVID-19 is coming to an end, the pandemic isn’t over, and Nova Scotians will need to continue practising some of the measures that prevent the spread of the virus.

“I know people are really anxious and would love things to get back to what they were prior to COVID-19, but until we have high levels of immunity in the population, we have to stay vigilant in fighting this virus,” he said.

“We have to find a new way and adapt to this new normal, which really, we need to think about how we live with COVID-19.”

He also said Nova Scotians may need to continue practise physical-distancing on some level, such as avoiding gathering in large groups and keeping distance from others when in public, and may also need to limit non-essential travel.

“These measures will need to be in place for the months ahead as we enter into recovery, but it is part of how we live with COVID,” said Strang.

“We need to continue to make choices that limit the opportunity for the virus to spread. That is part of our new normal.”

He noted there has lots of debate around masks, but said the evidence has evolved and now shows that face masks can reduce the spread of the virus, when worn properly.

He said some stores and businesses may require customers and clients to wear face masks, moving forward.

The provincial state of emergency has been extended to May 31, though the province has eased a number of restrictions in recent weeks.

Can you get COVID-19 through the ventilation in your home?

How Canadian graduates are celebrating despite COVID-19

Working from home? How to make your makeshift office more ergonomic

Quebec to allow outdoor gatherings of 10 people from 3 households

Can my kids go to overnight camp? Depends where it is

Kanesatake Mohawks outside of Montreal demand their territory remains closed