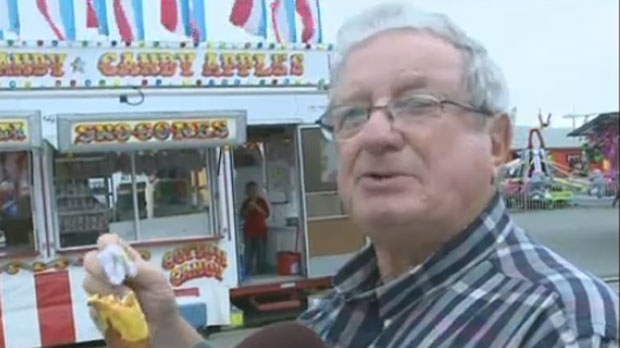 A dippy dog enthusiast chows down on the tasty treat at the Fredericton Exhibition.

At the Fredericton Exhibition you can test your luck, go for a ride, or fly high, but it’s the Dippy Dog that steals the show every year.

The Dippy Dog, which is a hot dog dipped in fluffy batter and then deep fried, turns 50 this year.

“The first thing I do when I come to the Frex is get a Dippy Dog,” says one exhibition goer.

“I’ve been all over the country and this is the best place for them,” says another.

On Labour Day Monday there were lines of people waiting to take part in the Fredericton Exhibition tradition.

“What we had was a record crowd on Monday, the most people we’ve ever had on any day of the Frex,” says Frex executive director Mike Vokey.

As it would happen, there were hornets around too, a lot of hornets. While hornets around food stands in the summer is hardly rare, these particular hornets seemed to be on a mission - stinging workers and people waiting in line to get their dippy dog fix.

Despite the threat of a stinger, volunteers say many stayed in the lineup - after all, this chow only comes around once a year.

“They were quite aggressive for awhile - they were swarming all over the place and people were swatting at them,” says volunteer Leo Leger.

Some people were stung and required attention at the First Aid station, but other than that, there was nothing a Dippy Dog couldn’t fix.

Wednesday’s heavy rains and today’s showers helped to get rid of many of the hornets, however, some are still hovering around the exhibition grounds. But that’s not enough to keep loyal Dippy Dog lovers away.

“It’s the only reason I come to the exhibition. I love them,” says one Dippy Dog lover.

The Frex runs until Saturday.