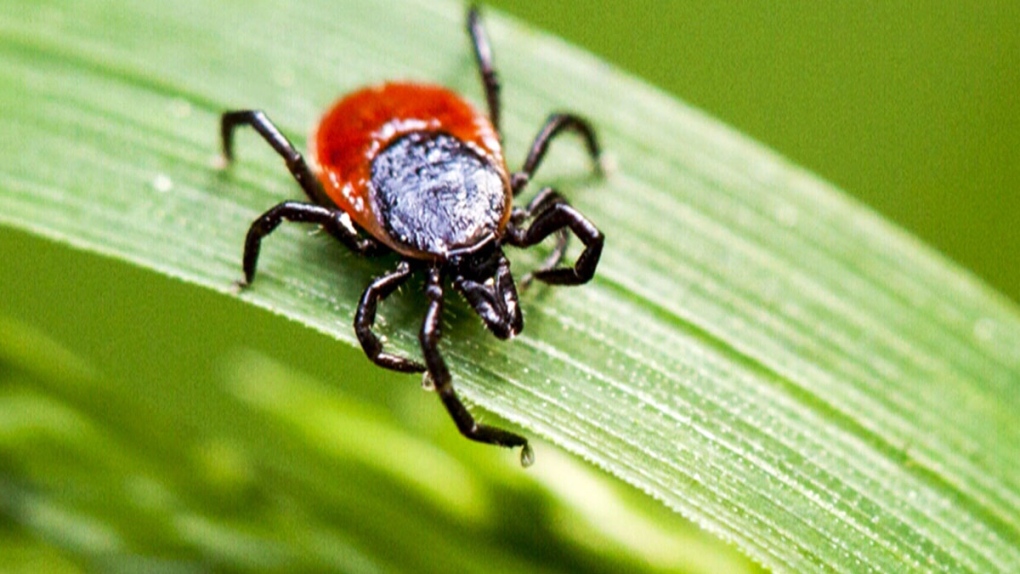 A deer tick that can transmit Lyme disease is shown in this file photo.
HALIFAX -

The prevalence of ticks that can carry Lyme disease is expected to be higher than ever in much of Canada this year, researchers say.

Vett Lloyd, a researcher and director of the Lloyd Tick Lab at Mount Allison University in New Brunswick, says that as the impacts of climate change progress, each tick season will likely be worse than the last.

"As the winters are getting milder and shorter, the ticks are surviving better, and they have more time to feed and have a tick romance," Lloyd said in a recent interview Friday. "Once a female tick finds a male and food, she can produce for roughly 3,000 eggs. When this starts happening, (the population) explodes very quickly."

Nova Scotia has the highest ratio of ticks to people in Canada, Lloyd said, and is second to Ontario in the total number of reported ticks. But the insects can be found across Canada.

People will notice ticks, maybe on their pets or in their hair, after spending time outside near long grass. They're active in late April through June, and then they typically rest through the hottest months, Lloyd said. Tick presence then peaks in late September through to November.

The tiny bug is a concern because it spreads Lyme disease, which is harmful to humans and pets. Not all ticks carry the Lyme disease bacteria, but black-legged deer ticks are most likely to be infected, Lloyd said.

Cases of the tick-borne disease increased in Canada by 150 per cent between 2020 and 2021, with almost 2,900 cases reported to the federal government last year. The report notes that its tally of Lyme cases may still be low, "because some cases are undetected or unreported."

The most common sign of Lyme disease is an expanding skin rash that typically begins at the site of the tick bite. Other early symptoms include fever, chills, fatigue and headache. If left untreated, the infection can spread to the joints, heart and nervous system.

Justin Wood, CEO of Ontario-based tick-testing organization Geneticks, said tick activity keeps rising. "I think everybody will say they're seeing more ticks each year," Wood said in an interview Tuesday. Geneticks' lab has received more than 400 ticks to test in the last six weeks, he said. About 1,600 ticks were sent to the lab throughout the 2021 tick season.

Lloyd agreed: "It's a bad year for ticks," she said.

Ticks can reproduce locally, and new populations of ticks are introduced on migratory animals, typically by hitching rides on birds, Lloyd said. Ticks also travel and spread locally on mammals such as deer or mice.

The Canadian Veterinary Medical Association says on its website that ticks are expanding their range in parts of Canada at a rate of about 46 kilometres per year.

In Ontario, a 2019 University of Ottawa study found that one-third of black-legged ticks in the Ottawa region were carrying Lyme disease.

Manisha Kulkarni, an associate professor with the University of Ottawa who studies ticks and tick-borne illness, said in an interview that over the last five to 10 years, researchers have noticed "a big northward expansion" of black-legged ticks in the Ottawa region.

"Ticks are being detected in more and more locations around the city of Ottawa and closer to areas where people are living, so there's also more chance of people coming into contact with them," she said Tuesday. The City of Ottawa reported 180 cases of Lyme disease in 2019, 120 in 2020 and 290 in 2021.

The northward expansion of ticks is also seen in Quebec. McGill University associate biology professor Virginie Millien says the movement of ticks means they can now be found in suburban areas in the southern part of the province where they were not living even five years ago.

About 10 years ago, there were a few locations in Quebec where researchers would find established tick populations, she said, all on the south side of the St. Lawrence River.

"Now they have crossed the river, and the warmer it gets and with more humidity ΓÇª the conditions are perfect for ticks," Millien said Monday. "In southern Quebec, they're now pretty much everywhere. Including in my backyard."

In Nova Scotia, ticks can be anywhere, but they are most populous in the South Shore and Annapolis Valley regions. They are also frequently found in Halifax and the surrounding areas. Researchers collecting and sampling black-legged ticks found that in Nova Scotia, 30 to 50 per cent of them carry Lyme disease.

In order to keep Lyme disease manageable for Canadians who may be infected, Lloyd would like to see ramped-up Lyme disease testing offered in the health system. Early detection and treatment can dramatically improve disease outcome, she said.

This report by The Canadian Press was first published June 1, 2022.

Quebec Cardinal Marc Ouellet, once considered a front-runner to become pope, has been accused of sexual assault and is among a list of clergy members and diocesan staff named in a class-action lawsuit against the archdiocese of Quebec. A woman identified as 'F.' in court documents tabled on Tuesday accused Ouellet of several incidents of unwanted touching.

Parents will need a prescription for some children's liquid medication, SickKids warns

Parents of young children may need a prescription for over-the-counter fever and pain medication due to a shortage at some pharmacies, Toronto's Hospital for Sick Children is warning.

A B.C. man, who was among the first Canadians approved for Canada's Vaccine Injury Support Program, says he is frustrated with the length of time it is taking to receive compensation.

The wolves that were found outside their enclosure at the Greater Vancouver Zoo Tuesday appear to have been freed on purpose, according to officials.

The senior Mountie who made allegations of political meddling in the investigation into the 2020 Nova Scotia mass shooting defended his position to members of parliament Tuesday.

OPINION | Economists are forecasting a recession in Canada, how should you prepare?