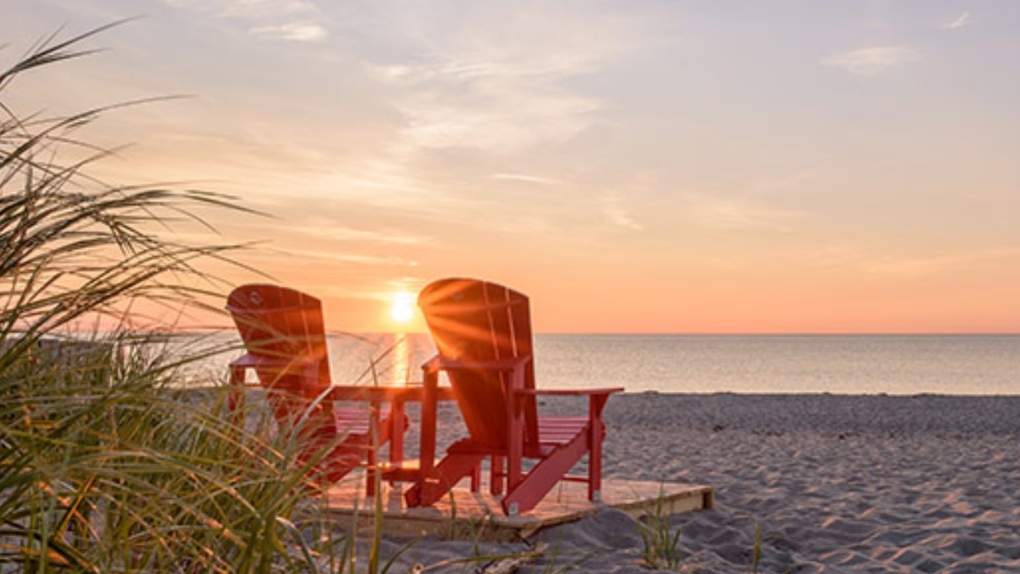 KOUCHIBOUGUAC, N.B. -- A group of 50 people gathered last week on a grassy area overlooking the Fontaine River on New Brunswick's east coast to share memories and erect a teepee. Their answer for why they were there was simple: "This is home," they said, one after another.

In the eyes of the federal government, however, the land is not anybody's home but public land in the heart of a national park. Most of the people gathered Wednesday were children or teenagers when their families' houses and properties were expropriated in the early 1970s to create Kouchibouguac National Park.

Magella Cormier was a young adult when the order to move came, and she has vivid memories of life before expropriation. "It was like heaven," 75-year-old said as tears streamed down her face. "You can't forget a place like this, you just can't."

Cormier was a member of the group that gathered last Wednesday to install the teepee as a symbolic show of support for members of the Vautour family, who have remained on the land for decades in an effort to fight the expropriation.

The 228 families who lived in the area in the 1970s were some of the poorest people in the province and couldn't afford to hire lawyers for a fight in the courts. Many received as little as $4,000 in compensation.

Frank Cormier, 72, said that while the families didn't have much money, they also didn't have mortgages to worry about, and they could rely on the riches of the land and waters around them. "We lived off the land, lobster, quahogs, clams, fish, and we had a good life," he said. "When the park came here, it made a mess."

Cormier said he lived in the area until the age of 17, and after expropriation, families were scattered and he lost contact with his childhood friends. "It was sad," he said. Cormier's family lost their house and 97 acres of land.

One man, Jackie Vautour, famously resisted the expropriation, remaining on the spot where the teepee was recently raised alongside a couple of trailers and some sheds. Vautour claimed his family and others were Metis-Acadian and had a right to stay. It was a battle he would fight until his death in February at age 92.

Since he died, Parks Canada has sought to have the family leave in letters written to Vautour's wife Yvonne and to a non-profit organization, Elders Without Borders, that is representing the family. The group describes itself as being dedicated to preserving the teachings of Indigenous elders.

As well, Stephen Augustine, a hereditary chief of the Mi'kmaq Grand Council, is keeping the issue before the courts with the claim the land is unceded and unsurrendered Mi'kmaq territory. Augustine gave his permission for Vautour and his family to stay on the land.

Vautour's son Edmond has vowed to continue the fight for the property and plans to live there with his mother and brother, Rocky, this summer. "If we don't have land and rights, we don't exist. After 50 years nothing was settled yet," Vautour said Wednesday.

"We will keep on as we did before. We live our normal life. We garden and go fishing just like we used to."

But in its letters, Parks Canada says it is time for the family to vacate the land. Parks Canada did not make anyone available for an interview for this story, but officials referred to a statement posted on their website May 17.

The statement notes that after a 1981 special inquiry on Kouchibouguac National Park, "there was a recommendation that although it was acknowledged that Mr. John (Jackie) Vautour was not abiding by the court order at the time, that Parks Canada could allow his presence on the land in the national park, provided he stayed within the law in other respects and did not use the site as a base for action against the park."

The statement adds, "With Mr. Vautour's passing, Parks Canada is bringing his occupancy within the park to a respectful and peaceful close." It said it has offered to help Yvonne Vautour remove all items from the property and has "respectfully requested that within a reasonable period of time the occupation be brought to a conclusion."

But Edmond Vautour says he'll continue the fight, and there are another 66 families who remain committed to getting their land back as part of the Mi'kmaq Grand Council's legal action. Many members of those families attended the brief gathering last Wednesday to support each other and share stories of the past.

"The older people here were broke. They couldn't hire lawyers," he said. "We are fighting for them."

For Magella Cormier, the pain of having to leave the property with family still hurts 50 years later. "It's still home. It belongs to us," she said. "I hope we can go back there."

This report by The Canadian Press was first published May 23, 2021.