The family of a Halifax homicide victim says she will finally be laid to rest eight years after her death, now that they have received her final remains.

The body of Tanya Jean Brooks was found in a trench along the west side of St. Patricks-Alexandra School the afternoon of May 11, 2009.

Investigators were able to trace her movements until about 9 p.m. the night before her body was found, but the Mi'kmaq woman's murder has never been solved.

Her family issued a statement Thursday, asking for people to come forward, and releasing new information about Brooks’ remains.

According to the statement, Brooks’ brain had been withheld as part of the ongoing investigation, until Wednesday, when it was turned over to her family.

Her family says they shared a special moment with members of Victim Services, investigators, and the medical examiner as they honoured Brooks by participating in a sacred, spiritual smudging ceremony.

“In Mi'kmaq culture, in order for our spirits to rest, our whole body needs to be as one. With yesterday’s events, Tanya is whole again, which was our mother’s last wish before her death in September 2015,” said her family.

“On behalf of our mother, it’s an honour to have Tanya complete so that she can return home be laid to rest and our family can begin to heal.”

Brooks’ family says she will be laid to rest in the coming weeks, which they hope will prompt someone to come forward with information.

“We know that people out there have information about her death who have yet to come forward to police and we appeal to them to do the right thing – please, break your silence and allow us to find justice for Tanya,” they said.

Investigators say they believe Brooks knew her assailant and that there are people who have information that have yet to contact police.

Brooks’ homicide is part of the Rewards for Major Unsolved Crimes program, which offers up to $150,000 for information that leads to an arrest and conviction in certain cases. 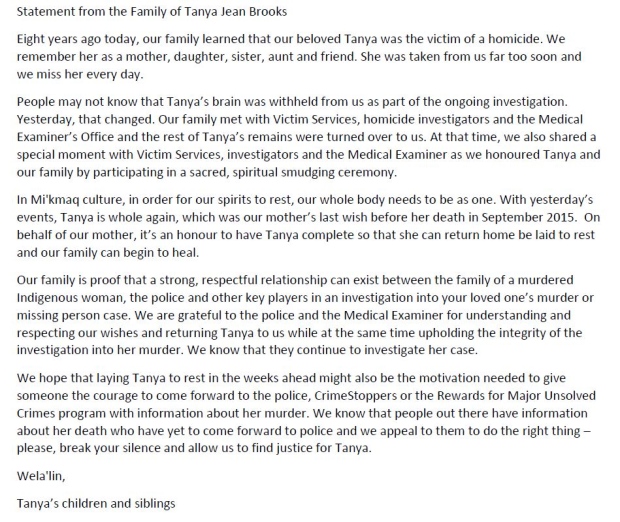