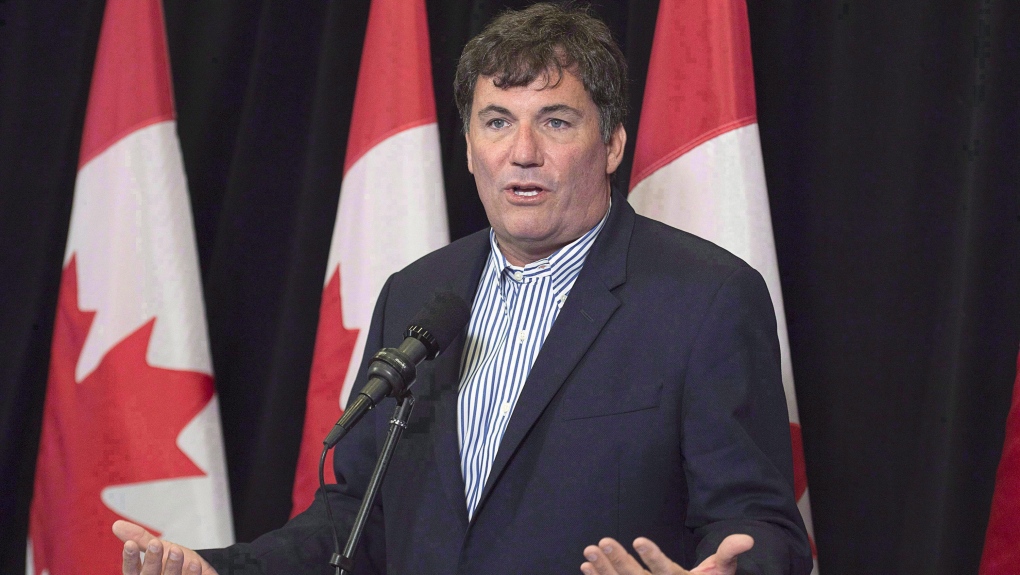 Minister of Fisheries, Oceans and the Canadian Coast Guard Dominic LeBlanc said he told the Maritime Fishermen's Union that he plans to open a harvesting zone in the last half of September. (THE CANADIAN PRESS/ Patrick Doyle)

Dominic LeBlanc said he told the Maritime Fishermen's Union that he plans to open a harvesting zone in the last half of September because of the 15-day closure of a 1,400-square-kilometre portion of ocean that begins Sunday.

LeBlanc said the offer will go to about 62 fishing vessels in New Brunswick and 60 from the Gaspe Peninsula whose lobster harvest will be largely shut down as the whales pass through.

Fishermen have complained to LeBlanc about lost opportunities to catch lobster.

LeBlanc said in a telephone interview Friday he didn't offer compensation or alternative seasons to other New Brunswick fishermen because earlier closures hadn't been as extensive as the new closures.

He said the latest requirement to remove lobster gear coming this Sunday leaves only "a sliver" of the regular fishing areas open for fishermen in northern New Brunswick and Quebec.

"In this particular group ... it effectively makes the finishing of the season very difficult if not impossible for them," LeBlanc said.

The minister said he has some flexibility in the fall season if weather proves to be a problem.

"I'm convinced there is a way to offer those that are affected a chance to replace the lost revenue and they can work with us to figure out a way to do that," he said.

Carl Allen, the president of the Maritime Fishermen's Union, said in an interview that his organization would have preferred if Ottawa had accepted its proposals to allow lobster fishing in shallow waters.

He said it will be up to the lobster harvesters in northern New Brunswick and Quebec to decide on whether to attempt to fish in the small area that will remain open, or to accept the offer of a fall season.

"Ultimately it will be up to them to decide and I'm not really sure which way they're going to go," he said.

"They've tested that before in the past and it didn't work out so well."

However, LeBlanc said he has little choice, as there's a wider risk to the Canadian lobster industry due to possible trade and other sanctions if whales become entangled in Canadian fishing gear.

The federal Fisheries Department has noted whale deaths have resulted in a temporary suspension of Marine Stewardship Council certification for the snow crab fishery in the southern Gulf, and additional trade and eco-certification impacts could result in "long term serious economic impacts to coastal communities in Atlantic Canada and Quebec."

As aerial surveys have gone up, there have been no reported deaths of North Atlantic right whales in Canadian waters this year, even as dozens of the endangered mammals were spotted amid strict fishing and vessel speed restrictions.

DFO said earlier this week that aerial surveillance had so far detected at least 75 whales in the southern Gulf of St. Lawrence.

Meanwhile, U.S. whale experts say they suspect a badly decomposed carcass that washed ashore in Virginia is that of a North Atlantic right whale.

Virginia Aquarium's Marine Science Centre was alerted to the large carcass on Metompkin Island, near the Maryland border, on May 31, the U.S. National Oceanic and Atmospheric Administration (NOAA) told The Canadian Press Friday.

"Whale experts have tentatively identified it as a North Atlantic right whale. Genetic samples have been taken to verify this finding," NOAA spokesperson Kate Brogan said in an email.

It would be the second 2018 death for the population, after January's discovery of a dead right whale off Virginia. The population suffered 17 losses last year -- 12 of them in Canadian waters -- likely due to rope entanglements and ship collisions.

Up until Sunday, DFO had temporarily closed 4,600 square kilometres of the Gulf and another 780 square kilometres in the Roseway Basin off Nova Scotia's southern coast to non-tended fixed gear fisheries such as snow crab and lobster.

Nearly 500 lobster fishermen brought empty lobster traps to Caraquet, N.B., on Thursday to protest against the continuing closures. They created a wall of traps outside a building where Acadie-Bathurst Liberal MP Serge Cormier has an office.