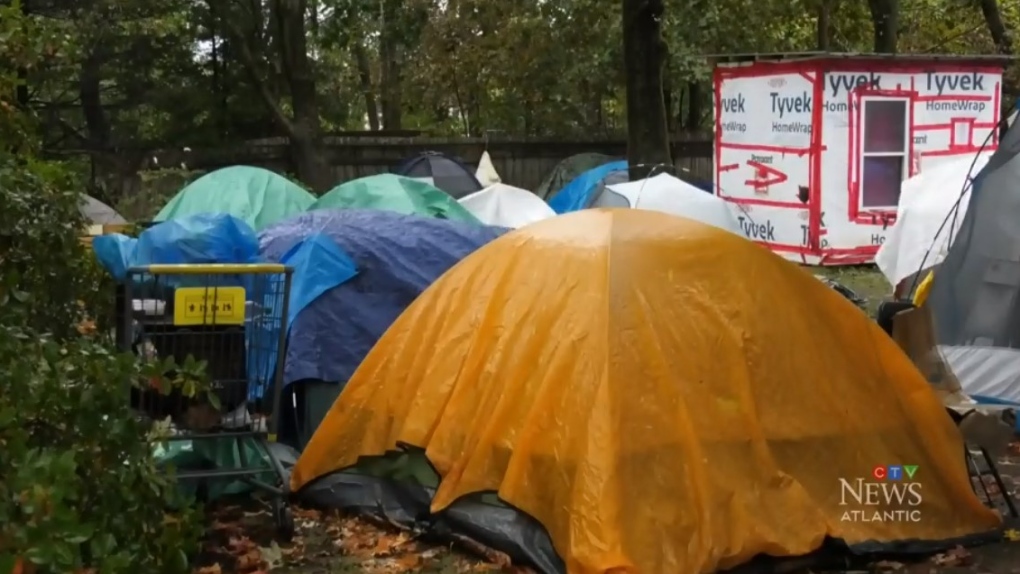 An encampment for people experiencing homelessness is seen in Dartmouth, N.S.
HALIFAX -

Responding to what city staff are calling a "homelessness crisis," Halifax city council has agreed to open four parks to camping for a total of 32 people without homes.

The plan approved unanimously in a council meeting Tuesday night is a first for the city, which last year saw tensions flare when temporary wooden shelters built on municipal property by a community organization were removed at the city's direction.

Coun. Lindell Smith says the goal is to provide added safety for people sleeping rough. Those camping at the four parks and green spaces will "not have to fear that we'll be removing them because they're staying there," Smith said in an interview Wednesday.

The city hopes to prevent "any future issues or potential conflicts like we've seen last year," Smith said, referring to the removal by police last August of wooden shelters and tents used by homeless people.

A resulting protest in front of the former Halifax public library in the city's downtown resulted in 26 charges after clashes broke out between police and demonstrators and protesters were sprayed with chemical irritants. Twelve of those charged have since had charges dropped.

Halifax Mutual Aid, the organization behind many of Halifax's wooden shelters, said in a statement Wednesday that legal tenting sites with washrooms and water are a positive step.

But the group is concerned the new plan will increase policing of people living in tents or other shelters in locations that aren't approved by the city. "Council has orchestrated a situation where the unhoused can never be safe from the threats and violence," the statement said.

The group is also disappointed that the plan only approves tents, when it would like people to be able to stay in wooden shelters. Council rejected including the wooden structures in its new plan, citing safety concerns.

Those camping in the four approved areas will be expected to follow noise bylaws and a ban on fires, which will be enforced by municipal compliance officers and not Halifax Regional Police. There are also limits on the number of tents allowed at each site.

He said in an interview Wednesday that despite "good intentions and good effort," from council, the plan accommodating up to 32 people doesn't offer the kind of help that is really needed -- increased housing stock.

Even with planned housing units on the books and new modular units available for up to 64 people, the staff report that recommended the tent plan said demand for shelter will "still exceed supply." Halifax, the report said, "is in a housing and homelessness crisis."

There were 200 shelter beds and 622 unhoused people in the city as of June 14, as reported by the Affordable Housing Association of Nova Scotia.

Outhit said it will be hard to enforce the limit on camping spots. If someone camping tells a compliance officer that shelter beds are full or they don't have a place to stay, they will not be forced out, Outhit said.

"So what have we accomplished? We still have people living in tents and we don't want them living in tents long term, and we have residents who are not happy that there may be more people in the parks than permitted," he said.

This report by The Canadian Press was first published June 15, 2022.