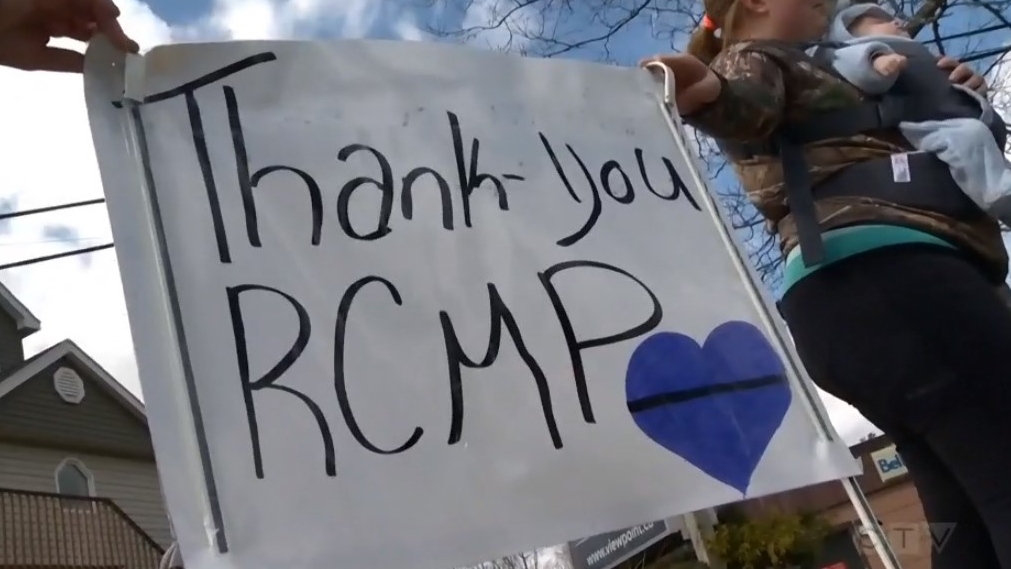 A woman holds a sign thanking the RCMP during a procession for Const. Chad Morrison in Elmsdale, N.S. on April 20, 2020.

HALIFAX -- Hundreds of people dotted Nova Scotia streets on Monday to pay tribute to the RCMP officer killed in the deadly weekend rampage, as well as a second officer who was injured in the mass attack.

Const. Chad Morrison, an 11-year veteran of the Nova Scotia RCMP, was released from hospital Monday after being treated for gunshot wounds.

After his release, RCMP vehicles escorted Morrison through Elmsdale, N.S., to his home in nearby Lantz.

Dozens of first responders, including fire trucks and police cruisers from across the province, lined the streets of Elmsdale as Morrison made his way through the community.

Hundreds of residents -- many waving Nova Scotia flags and carrying signs thanking the RCMP -- gathered to watch the procession, waving and clapping for Morrison as he drove by.

“I just wanted to come out and pay tribute to all the first responders and those that have been affected by an awful situation that happened here in Nova Scotia,” said resident Liane Gillis.

“You never want to see anything like this occur in a community within Canada and we’re just all shaken.”

Shelby Fraser said the deadly incident hit close to home for her, not only because the suspect was killed near her community, but also because she has relatives who are RCMP officers.

“They risk their lives every day and it really showed yesterday, so I wanted to bring my kids down here so that they can see the people who help keep them safe every day and everything that they put on the line for them,” said Fraser.

When Morrison arrived at his home in Lantz, he was greeted by friends, family, neighbours and police officers, who welcomed him home with signs and balloons and a round of applause.

Morrison -- a bandage on his right arm and a cast on his left -- waved to the crowd and thanked them for their support. 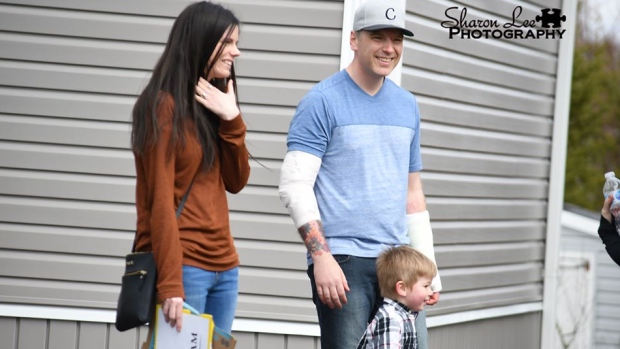 Injured RCMP Const. Chad Morrison is greeted by loved ones at his home in Lantz, N.S. on April 20, 2020. (Sharon Lee Photography)

There was a similar show of support in Dartmouth, N.S., where police gathered to pay tribute to Const. Heidi Stevenson late Monday afternoon.

Stevenson, a 23-year veteran of the RCMP, is among at least 18 victims found dead following the weekend rampage.

A hearse carrying the slain officer’s body was brought to RCMP headquarters in Dartmouth, where officers gathered outside to salute their fallen comrade. 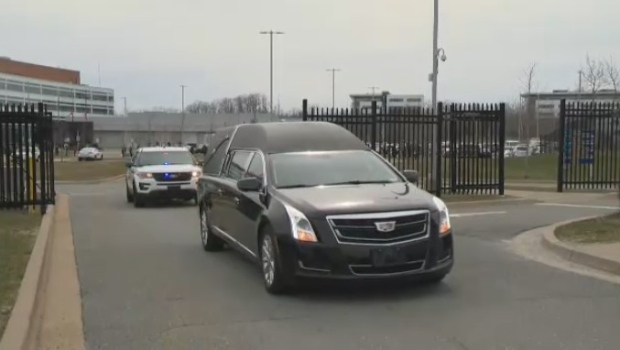 Dozens of people lined the sidewalks outside RCMP headquarters as a procession of police vehicles -- their emergency lights activated -- escorted the hearse from the building to a funeral home on Main Street in Dartmouth.

For those who wish to pay tribute to Const. Heidi Stevenson, the RCMP has created a special email address for messages of condolence, which will be passed onto her family. Stevenson is survived by her husband and two children.