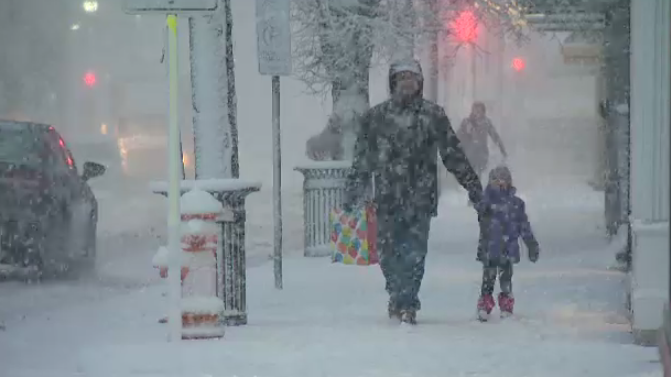 Pedestrians brave the wintry weather during a snowstorm in Halifax on Jan. 8, 2020.

Saturday will see increasing southwesterly winds bringing up mild air from the U.S. eastern seaboard. This will have the effect of raising temperatures a few to several degrees above 0 for the Maritimes, with some areas in Nova Scotia pushing into the low teens. This is accompanied by cloudy skies and wet weather. Patchy drizzle and fog will be around for much of the day with a band of rain moving from northern New Brunswick in the morning to southern areas of that province, P.E.I., and Nova Scotia afternoon and evening. 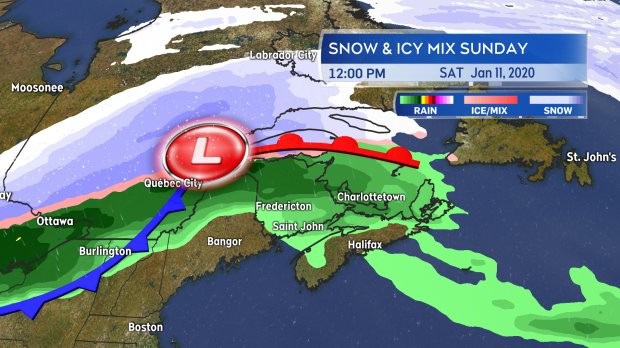 Central and southern New Brunswick, eastern P.E.I., and much of northern and eastern Nova Scotia will switch to a mix of snow, ice pellets, and freezing rain. Accumulation for these areas will depend on the nature of that mix. More snow and amounts may reach 10 cm to 15 cm. Less snow and more ice pellets will keep most in the range of 5 cm to 10 cm.

The remainder of mainland Nova Scotia will be at risk of several hours of freezing rain on Sunday, with the exception of coastal areas running from the South Shore to Halifax, where it is looking more likely to be rain with totals in excess of 20 mm. Those areas that do see an extended period of freezing rain can expect ice to accumulate on surfaces such as roads, sidewalks, walking paths, tree branches etc... 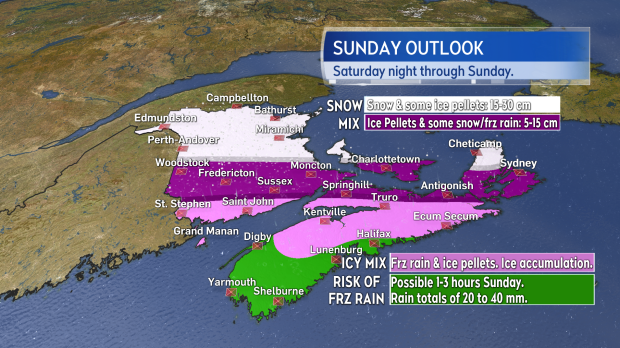 Southwest winds will peak with gusts Saturday evening and night, ranging 40 km/h to 80 km/h with the strongest occurring on the Fundy coastline of New Brunswick, coastal P.E.I., and coastal areas of Nova Scotia. On Sunday the northerly winds will mainly gusts of 30 km/h to 50 km/h, with a risk of gusts from 50 km/h to 80 km/h on the Atlantic coastline of Nova Scotia in the afternoon. 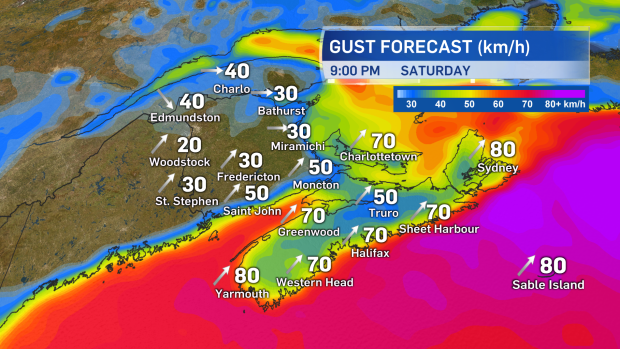 Impacts from this system will be primarily to travel. Those should be minor on Saturday, but be cautious of reduced visibility on roads in rain and fog. Roads will be further affected on Sunday, with the heavy mix of snow, ice pellets, and freezing rain. Travel services such as ferries, airports, and bridges should be checked within the event of delays.

Due to the heavy snow and icy mix in the forecast, power outages are a risk. Rainfall for Halifax and west in Nova Scotia may lead to some flooding. This would be a result of totals approaching 30-40 mm for some, along with melting snow and blocked drainage systems.

Check in frequently on the forecast for your area this weekend as the worst of this weather is still 36 to 48 hours out.