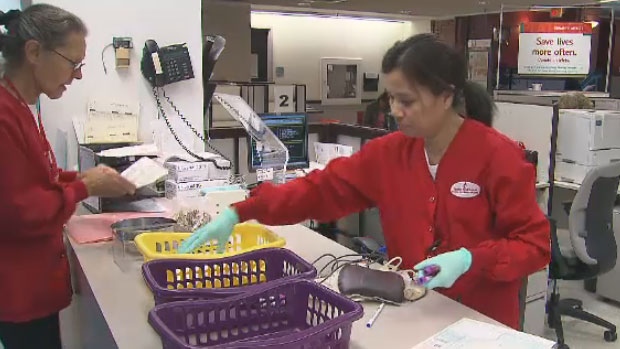 A decision by Canadian Blood Services to drastically reduce the wait-time for gay men to donate blood isn't going over well with some in the LGBTQ+ community around Halifax.

A decision by Canadian Blood Services to drastically reduce the wait-time for gay men to donate blood isn't going over well with some in the LGBTQ+ community around Halifax.

Thirty years ago, gay men were prohibited from donating altogether because of the AIDS scare, but the agency says improved medical science and testing means the wait time can be reduced to three months.

But some say the new policy is just discriminatory as the old one.

“I knew someone in my community that was hired to sit at the blood clinics and say, ‘no, not him; No, I'd be careful about him, too,’” MacKay said.

Federal Health Minister Ginette Pettipas Taylor said Wednesday “we want to do all that we can to reduce all barriers so that people will be able to provide the blood sample and the blood donations.”

After generations of being banned -- and then heavily restricted from donating -- Canadian Blood Services took another giant leap yesterday, cutting the wait period for gay men from one year to three months.

“Whether the next change will be a reduction in the waiting period, or whether it will be a totally different way of thinking about risk, and being more nuanced in how we screen men who have sex with men, I'm not sure,” Dr. Mindy Goldman, the Canadian Blood Services medical director of donor and clinical services said from Ottawa.

But Adam Reid, the executive director of Halifax Pride says three months is as arbitrary as the previous limits.

It's a sentiment shared by MacKay, who hasn't offered to donate blood since the 80s, and has to think hard about whether he'd consider donating now.

“It hasn't changed a lot for me,” he said. “Trust is something that has to be built up.”

MacKay freely admits the discrimination faced by gay men in the 80s still stings, even today, but he generally likes to focus on the positivity and the changes that have taken place since then.

For his part, Reid points out the new policy continues to make broad generalizations about the community, so, as far as he's concerned, it's a failure.