Lucrative race for the best spots kicks off lobster season in southern N.S. 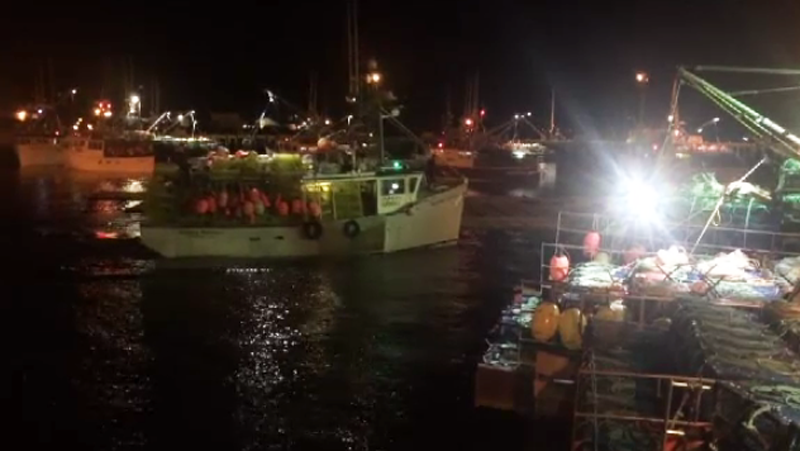 HALIFAX -- Before the crack of dawn Monday, Hubert Saulnier and nearly 5,000 other lobster fishermen prepare for the most hectic and lucrative day of their season.

"Dumping Day" in southern Nova Scotia falls on the last Monday in November, where 1,500 fishing boats depart at the same time, usually 6:00 a.m., to let out their lobster traps for the year.

"It's the worst day of the season," said Saulnier, captain of the Lindy Dawn and 46-year veteran of Dumping Day. "In the winter it's cold and rough sometimes, but it's not as bad as Dumping Day."

The stakes are high for those involved as the fishing vessels race to lay claim to the best spots.

Not being able to lay claim to the best spots can mean thousands in lost revenue, missing out on the day completely is almost out of the question.

"If you miss out on the first few days because your boat breaks down,...you just have to bear with the situation and live with it," said Saulnier. "It's not so good when you're tied up in the wharf...and you see people coming in with five-six thousand pounds of lobster."

Lobster fishing in the Canadian Atlantic ocean is divided into districts, each with its own separate fishing season. The southern part of Nova Scotia, Districts 33 and 34, open for lobster fishing on the last Monday in November and the season remains open until May 31.

Districts 33 and 34 are widely considered the largest and most lucrative lobster regions in the country. District 34 alone accounts for roughly 23 per cent of all North American lobster.

"It's a very large event for these communities and it's important for the economy...and to Canada as a whole because it's a very lucrative fishery," said Mark Comley, area chief of Southwest Nova Scotia with the Department of Fisheries and Oceans.

The unpredictability of the weather and the intense competition for the best lobster fishing spots contributes to making Dumping Day a fairly dangerous endeavour.

Times have changed and safety has become of the utmost concern. Before anyone heads out, everyone must agree it's safe. The past two Dumping Days have been delayed because of the weather.

Safety on Dumping Day is also of high concern for the Canadian Coast Guard, where two ships will be patrolling the area before the 6:00 a.m. start time. The Coast Guard will be also pre-positioning three life boats in the region and will have two military rescue aircraft on "enhanced standby."

Saulnier said the changes have come from more than just the focus on safety. Vessels are larger and the pressure to keep up has forced virtually everyone to improve their fleet.

In the past, if it was dark or if the wind blew more than 40 kilometres an hour, fishermen would pack it in for the day. Now the operation runs around the clock and in much worse conditions.

"It's changed from something to do, to a job," said Saulnier.

The exact value of the lobster will be determined by how many everyone brings in, but Saulnier said he's hoping for $5 per pound.

"The main thing is hopefully everyone comes home Monday night with their traps in the water and everyone is safe and nobody gets hurt."