HALIFAX -- Sending a message in a bottle as a way to communicate is not the first choice for many these days, but one Nova Scotia man might say otherwise.

Sebastien Allain is an avid kite-surfer and was excited to hit the waves in Nova Scotia’s Chezzetcook Bay after borrowing some top-of-the-line gear from a friend.

It didn’t take long, though, for Mother Nature to rain on his parade.

“And there’s a strong gust that came and just flicked the kite into the water, and the wind was offshore, so it drove the kite out to sea,” said Allain.

Feeling sick about losing his friend’s equipment, Allain decided to research tides and winds, and reasoned that the kite may have ended up on one of a number of small islands nearby.

Determined to get it back, he swam to one island and, within four hours, he had found the missing gear – along with another unexpected find.

“And as I was returning from the island, I just saw a bottle,” explained Allain.

Allain picked up the bottle, which was corked and contained a note, and headed home to see what was inside.

He was stunned to find a three-page note and a small ring.

“We took the tape off and we realized it was a diamond ring,” said Allain. 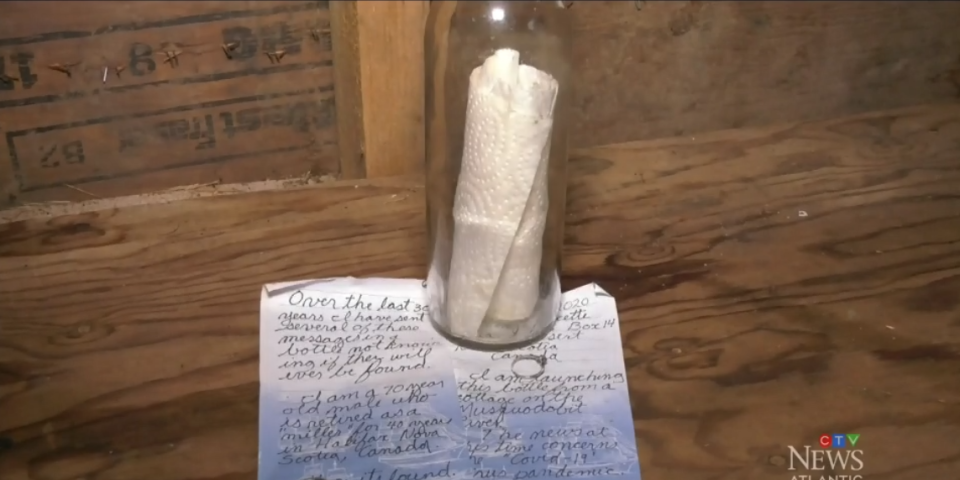 After reading the long letter, Allain learned the bottle was launched by a senior not too far away, who has been sending messages in bottles for 30 years. He also learned the ring belonged to the senior’s mother, who died in 2018.

The discovery proved to be a bit surreal for Allain and his fiancée, who recently received a ring of her own.

“It’s just crazy that I found the bottle and there was a diamond ring inside, and the funniest thing of all, is that I just proposed to my fiancée the week before,” said Allain.

After learning in the letter that the bottle launcher was a local man in his 70s, Allain and his partner wanted to do something nice for him.

“When he said he was 70 years old, we were like, ‘Oh gosh, maybe he’s living by himself, so we should get him something for Christmas,’” said Allain.

“So we decided we would go up and visit him, and we brought him a little box of chocolates and stuff.”

This isn’t the first time one of the senior’s bottles have been found.

Another was found by a teacher, which prompted a flood of Christmas cards from students, which the man said he greatly appreciated.

The senior declined to be interviewed, but he told CTV News he is pleased his bottles are making people happy.