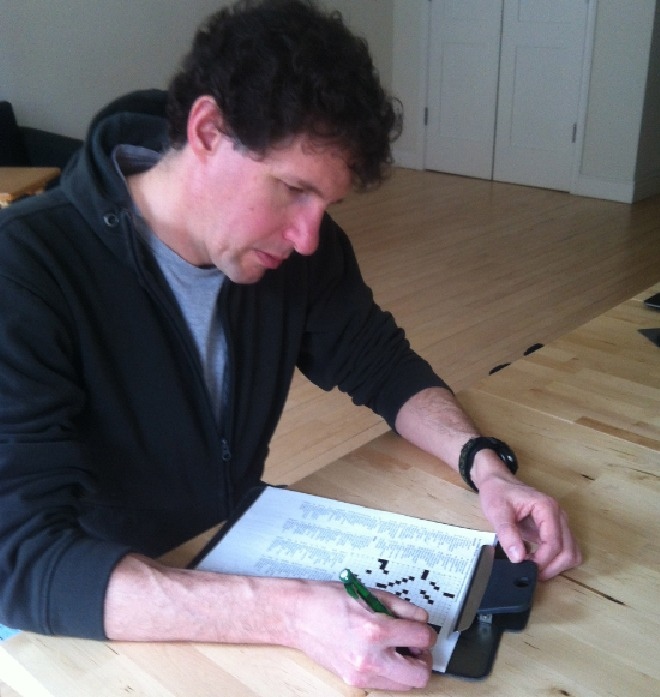 Any given Sunday, you might find Ken Crowell working his way through a crossword puzzle in his Halifax home. This weekend, he’s solving puzzles but he’s surrounded by hundreds of his closest crossword friends. Crowell is competing in the 38th American Crossword Puzzle Tournament in Stamford, Connecticut. The tournament is the oldest and largest of its kind in the U.S. and Ken is one of few Canadians who dare to put pencil to paper at the annual event.

"I've been doing word puzzles since I was a little kid,”says Crowell. “I didn't really get into crossword puzzles until I was an adult.”

Crowell started solving competitively for speed after seeing the documentary "Wordplay". Released in 2006, the film features the work of long-time crossword puzzle editor Will Shortz of the New York Times. This inspired Crowell to enter his first American Crossword Puzzle Tournament (ACPT) in 2012. He placed 82nd out of 592 solvers. The next year, he was 53rd among all competitors but in the “foreign” division, Crowell was second only to Vancouver, BC’s Emily O'Neill. Last year Crowell worked his way up to 41st in the overall standings and second again among non-Americans.

"The tournament atmosphere is awesome," says Crowell. “There's nothing like being in a group of people who feel the same way about your little niche and you don't have to explain what you love about it or feel like someone's looking at you sideways for being into something so nerdy."

Puzzle people may not be as ‘nerdy’ as Crowell thinks. In fact, crosswords have been getting a lot of attention lately with the release of “The Imitation Game”. The movie centers around mathematician Alan Turing and his role in cracking the Enigma machine code. Many of those who worked in Bletchley Park with Turing for British military intelligence were recruited because of their ability to solve challenging crossword puzzles.

Crowell isn’t a code breaker but he and his fellow competitors do have to tackle up to 8 original puzzles created specifically for the event by master puzzle makers. Scores are based on accuracy and speed. It’s a great workout for the mind and Crowell trains by doing up to five crosswords a day. He also keeps himself in physical shape by competing in triathlons. He began 3 years ago and is now training for a half-iron distance.

His endurance training came in handy over the weekend. Crowell finished 32nd overall, holding on to second place in the foreign category.